A new channel way for the Suez

A new channel way of the old Suez canal was put into operation in Egypt. The opening of the new channel way is of great importance both for Egypt’s economy and for the whole world


On August, 6 an official ceremony of putting in operation of the second channel way of the Suez took place in Ismailia (Egypt). The Russian delegation headed by Prime-Minister Dmitry Medvedev took part in it on the invitation of the President of Egypt.

The new 71.9km long channel way costing $8.5 bln was constructed in record terms – in one year instead of the initially planned three. It is parallel with the old one and also connects the Mediterranean and the Red seas. The opening of the new through-passage made the Suez two-way and made it possible to double the traffic capacity, shortening the travel time from 18 to 11 hours. According to the expectations of the Egyptian government, due to the new Suez the income of the country will increase from $5.3 bln to $13.2 bln by 2023.

Together with laying the new channel way, the reconstruction and up-dating of the old one was carried out ($4 bln): it was deepened, and now superlarge tankers can pass through it. According to calculations, the New Suez will let 97 ships pass a day from the north to the south (by 2023), and in the old one - 49 ships will pass daily from the south to the north. The new channel way is 317 m wide and 24 m deep, the old one is up to 350 m wide and up to 20 m deep. Under the bed of the new channel there are 6 tunnels, and 6 new ports, a vast logistics center, industrial areas with stores and a 200 km long railway network situated on the banks.

Egypt authorities are planning to attract up to $60 bln of investments for the creation of a special economic zone. Special conditions for sales taxes and the export of manufactured products will be introduced, all restrictions for foreign companies’ ownership will be eliminated. The Egyptians are looking forward to developing active cooperation with Russia in the construction of these objects. This issue is being discussed between corresponding ministries of the two countries; the signing of the bi-lateral memorandum is planned in December of 2015. Additionally, joint projects in the sphere of military-technical cooperation and GLONASS are being worked out. 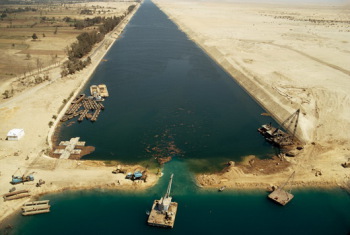 Special attention is given to cooperation in the field of nuclear technologies. Chairman of the RF Government Dmitry Medvedev spoke on its prospects in his interview to the local newspaper “Al-Akhram”. He said that the nuclear power generation industry is a strategic direction of Russian-Egyptian cooperation. Russia is ready to help Egypt become a regional leader in this field. Definite agreements were achieved during President Putin’s visit to Egypt in February, 2015. An Agreement on the development of the project of the construction of a nuclear power plant in Egypt was signed then. “The technical parameters,” said RF Prime-Minister, “and commercial conditions are already clear.” They will be formulated in the new inter-governmental agreement, almost ready for signing. Russia offers Egypt the most modern power generating units equipped with safety systems.

Dmitry Medvedev also remarked that similar projects are used in the construction of the new nuclear power plants in India, Iran, China and other countries. The document will be signed during the next top-level bi-lateral meeting. Supervisory committees of both countries are working on the memorandum on cooperation in the field of the nuclear power generation industry infrastructure. Besides this, the Ministries of finance of both countries are holding consultations on another intergovernmental arrangement – on lending Russian state credit to Egypt.
What does it mean for Egypt? These are thousands of jobs, a large-scale order for Egyptian industry and construction. These agreements are expected to be signed this autumn.
It should be mentioned that President of France Francois Hollande, Prime-Minister of Greece Alexis Tsipras, the King of Bahrein Hamad Ben Issa al Khalifa, the King of Jordan Abdalla II arrived at the solemn ceremony of opening of the new channel way, in total there were delegations from 90 countries.

It proves the importance of the new object for many countries of the world.
To remind you, the old Suez channel was opened on November 17, 1869.