Visitors to the exhibition “Construction equipment and technologies 2015” didn’t find the stalls of a number of constant participants in the largest exhibition of industry machinery and equipment.


Why didn’t the leading players in the construction machinery market come to the largest industry exhibition?

The largest annual exhibition of construction machinery and equipment, “CTT 2015”, bewildered many visitors. Having come to Moscow Crocus Expo Centre, they were looking for, but didn’t find, displays from a number of its constant participants. 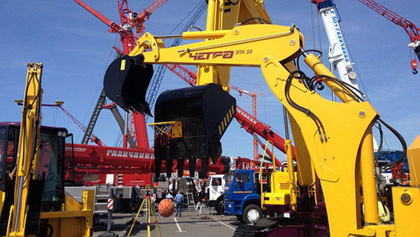 About those absent
There were many fewer expositions in the hydraulic and drilling equipment halls. The equipment for engineering communications laying was presented too modestly. The showroom for heavy duty vehicles looked rather empty.
— It’s not surprising, the exhibition’s organisers explained to us. — This year the “big seven” didn’t come to the exhibition. In fact, one can’t help but notice the absence of such largest players on the construction machinery market as Volvo, Iveco, Man, Mer?edes, Daf, Skania and Renault.
There were quite a lot of different guesses and suppositions behind the scenes.
— I think the reason is the fall in trucks sales, said Andrei Vlasov, the sales director of one of the large automobile companies. — Unfortunately, starting from 2012 the volumes of equipment sold has constantly decreased, and in 2014 we were in the doldrums, especially European producers whose vehicles got more expensive because of the currency rate. Many construction companies just cannot afford them. So the Europeans decided not to come here, not to waste money.
— Things seem to be a bit different, said Nickolai Lakotko, Deputy Chief Designer of the largest Belarussian concern, MAZ. — From my point of view, the leaders in the truck market have given priority to long-haul traffic, leaving the segment of construction machinery alone. You are sure to see them all at the next exhibition of long haul transport.
It turned out that not only foreign partners but also some domestic brands ignored the exhibition. For example, visitors didn’t see any product from such famous plants as “Uralvagonzavod”, which annually shows its excavators and other highway engineering in Moscow. 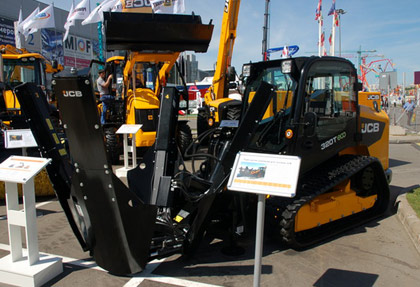 — I don’t see “Storydormash” from Alapaevsk with its drillers here, Sergei Kitaev, an exhibition participant from Ekaterinburg, and the Marketing Director of a company producing hydraulic equipment, told us. — Many are absent this year. I think that the reason is that a number of our Russian colleagues have decided to hold off, to see where the market will move.
He was sure that his company’s stand at the exhibition was necessary, otherwise the company might be forgotten. 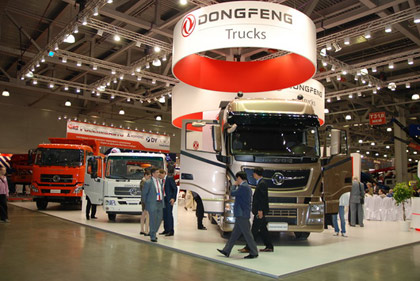 Chinese dominance
Everybody paid attention to the presentation of Chinese construction equipment. We counted dozens of Chinese brands in the heavy vehicles showroom and the open air sites. They looked quite impressive.
For example, the Chinese dump truck ‘Shacman’ with a comfortable new cab, had covered several thousand kilometers. Another Chinese company, Sinotruk, presented a vehicle produced with MAN technology: the Chinese swear it is better than the original. The Dongfeng company exhibited a whole line of heavy duty trucks.
— Our vehicles can transport maximal loads, and they are twice as cheap as European ones, says the manager, Artem Zakurdaev, proudly. It is also important that all parameters of the Chinese equipment are brought in line with Russian standards.
— There is still a misperception that Chinese machinery is short-lived, Vitaly Monkevich, Chair of the Russian-Asian Union of Industrialists and Entrepreneurs, opined. — I even heard that a Chinese vehicle works for twenty minutes and stops. But believe me, it is not so! The Chinese equipment of the latest generations is very reliable. And this parameter is growing.
According to Vitaly Monkevich, China is now very interested in opening plants in Russia. And we, for our part, are interested in the appeal of a quality producer. Of course, it’s additional rivalry for our own brands. But it provides additional jobs, and cheaper and more available machinery for Russia.
The process of beneficial links adjustment has already started. For example, the Chelyabinsk tractor plant has started to produce tractors with Chinese engines. A joint venture for transmission assemblage has been created in the Tula region. There are a lot of other examples. 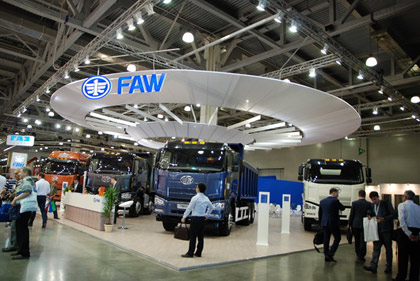 Three business cards for 7 m
Those who didn’t get frightened and who overcame their doubts seem not to have regretted their participation in the exhibition. Though there were fewer visitors, many exponents managed to “fulfil exhibition minimum”: to present their new products and to acquire new dealers. The only thing they were sorry about is that CTT didn’t make any concession for permanent participants.
— It is very, very expensive, griped the participants. — The rent didn’t change even though many of us had expected it to because of the crisis. The registration fee increased. Besides this, there are additional fees for engineering communications: water, electricity. It really takes money… 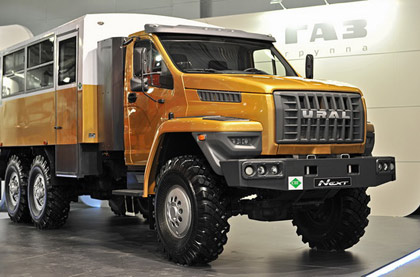 — Our plant is not very big, we produce loaders, said an exhibitor from Tartarstan (he didn’t want his name mentioned) — And it is rather a lot for us: we have paid about a million rubles for the stand for the company.
Another company, who also asked us not to mention their name on the pages of Construction.ru, complained of the low efficiency of the money spent on the exhibition.
— You see, we’ve paid 7 m rubles for this open site, said the representative of the company, making no secret of his disappointment, – and received on average three business cards a day. The game is not worth the candle…
But the companies who feel confident in spite of the crisis made expensive presentations of their production. 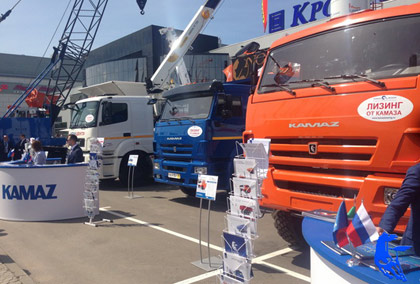 Exhibition is image promotion but not a trade channel
During all five days of the exhibition, the Cheboksaty company “Chetra” impressed the visitors. This is a popular Russian brand with a whole line of excavators and loaders. This year they organized a show with a shocking slogan, “Get over import!”, during the course of which maneuverable loaders, delicately turning, threw a ball into a basket. Powerful excavators did the same.
CG GAZ also brought a novelty to the exhibition — a universally comfortable cab which will be mounted on all the brand’s vehicles (from GAZels and GAZons to powerful URALs, which are also in the GAZ group).
— Our four-by-four dumping trucks are designed for severe conditions, the GAZ representative told us. — Compare our vehicles with Chinese loaders. I don’t argue, they are not bad, but they hardly can move over hedges and ditches. They are for highways. And our URAls are not afraid of off-road conditions.
The American company John Deere showed “intellectual” excavators provided with an SD Link system this year, giving us the opportunity to know how efficiently the fuel is being spent and which joints need repairing or replacing.
— Of course, we are having a sales decrease now, a representative of the company said. — But I think it’s short-term. Today we are having a decrease, and tomorrow it will be an increase. And we just must be ready.
The English company JCB didn’t come to the exhibition, but they delegated the task to their Russian distributor, thus their production line was presented on the open air sites.
The Japanese company Hitachi didn’t ignore the exhibition. Many dredgers from the brand are made in Russia, in Tver, where the plant producing Hitachi vehicles has been operating for some years.
— Some people think that vehicles produced in Russia are worse, said a sales representative from the company, Pavel Arakcheev. But it is not so! The vehicles assembled in Tver have the same quality performance as the Japanese ones. We have the strictest quality control at the plant.
Visitors were also interested in the equipment presented by JSC “Koluman Rus” from Naberezhnye Chelny, an affiliate company of the Turkish CG Koluman. Their construction, road and facility vehicles, mounted on Mercedes chassis, work in many Russian regions. 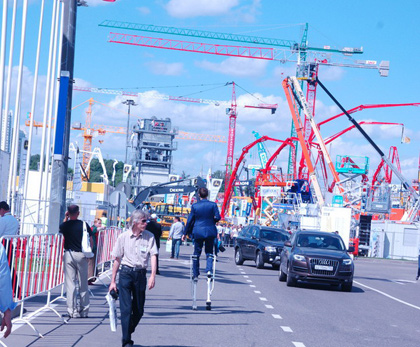 Leasing gives a helping hand
One of the most positive events at the exhibition was the presentation of a new leasing program by the Moscow region government. They offered a 50% subsidy for the construction equipment leasing fee, which will facilitate buying the equipment.
Some producers wanted to take part in the program. The JCB company offered versatile and competitive terms which, together with the subsidy from the Moscow region government, will make construction equipment 25% cheaper. The leader of JCB Finance in Russia and the CIS, Oksana Evtushevskaya, remarked that the whole program was developed while taking into account the needs of small and medium-size businesses in Russia. The John Deere company, as well as a number of other producers, both domestic and foreign, have their own leasing programs.

OSM 2015: Foreigners want to launch production in Russia but they get almost no help from Russian banks