Will the new draft law on construction contracts do away with price falls at tender?


Adjudication in such conditions results in difficulties for the contractor in assessing his real expenditures. The state requests just the pricing for the construction industry production. The point of price determination is one of the most acute issues – everybody remembers how it was solved in Sochi.
The research carried out by the Higher School of Economics showed that auctions do not lead to procurement value decreases, and a great number of participants doesn’t lead to the development of good healthy rivalry. If there is no good project documentation, there will always be the right environment present for corruption and abusive activity.
How to change the situation

The recent round-table conference was dedicated to this topic. The participants were presented with a new concept for the new Federal Law, “On new approaches to the formation of the draft bill, regulating the procurement system in the area of construction” (called the “On contract system” bill among constructors). According to Pavel Kolykhanov, Director of the International Institute for Contract System Development, who presented the document, it includes the main stages of construction: geotechnical investigation, design processes, and object construction. The draft bill takes into account all of the main statements of Federal Law ?44, but corrects the legislative environment from the viewpoint of the construction industry.
At the same time, as Pavel Kolykhanov says, there are important innovations in the text. One of them is the introduction of the notion, “the collective participant of contractual arrangements”. 75% or more of the work is to be fulfilled by a contractor who signs a general agreement, but all of its participants are enumerated in the agreement – it guarantees them participation in the work.
An important chapter in this document is about small and medium-sized business. The current situation is not favourable for this sector in the government procurement system. There is also an access restriction to government procurement for small companies. In the new version, all the restrictions on them are abolished.
A self-regulatory organization (SRO) is not the final authority 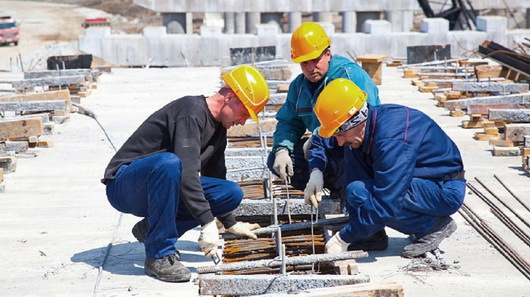 A separate chapter in the draft bill is about an SRO’s participation in the process of state procurement. According to this document, an SRO takes part in the process at the stage of the contractor’s definition by prequalification selection. As Pavel Kolykhanov stresses, the problem is that it is impossible for an SRO to take part in it directly because the self-regulatory organization’s interests arise, so it takes part at the preliminary stage. The SRO grants prequalification certificates to construction companies and is financially responsible (using an identification fund) in case a company defaults from its obligations. Prequalification is held at the request of one of the SRO members. Its point is to clear the market of bad construction companies and to stop bureaucratic arbitrariness in relation to construction companies. To put the process in order, constructors think it necessary to write prequalification standards.
It is also necessary to raise the prequalification stage level, our constant author Valery Mozolevsky, Head of NPO SRO “Sakhalinstroy”, thinks. He says that all over the world this subject is very well elaborated and there exist international prequalification standards. It is important to make prequalification certificate sales impossible, as some SROs act badly on account of this. That’s why it is reasonable to spell out in law an SRO’s responsibility for the validity and quality of issued documents. Moreover, it is quite necessary to introduce a postqualification as well.
Price is not the main criterion
Another principal thing about the project is the procedure of choosing a contractor. The most important thing here is to reject the use of auctions for this purpose. Price must not be the only criterion in choosing the contractor company. It is also necessary to exclude any dumping risk from some participants - that’s why anti-dumping measures must be present here, notwithstanding a decrease in rivalry, invitations to tenders for services, and one- and two-staged competitions. The competitions themselves must start with a maximum contract price, and its lowering must go hand in hand with maintaining the same volumes and all the quality parameters of the contract.

The customer is not responsible for the final result, so a widespread practice is that of the winner of the competition reselling the construction package to some other organization, which in its turn also sells it. And this results in the object’s final price growing and the construction quality decreasing.
On the whole, all innovations in the draft bill may be summarized by some principal points: the choice of contractor is up to the SRO, the auction rejection is announced, the notion of a collective participant is introduced, anti-dumping procedures are introduced, the tender itself is related to a definite object being built, and integrated information networks are created.
It is necessary to spell out the customer’s responsibility as to the object, Valery Mozolevsky feels sure. If he is criticized about having made a mistake when choosing the contractor, the customer answers that it is a computer that chooses and the customer only signs the contract formally. We are to put an end to this evil practice.
The market needs a qualified customer, and for this a customer institute must be created for forming civilized partnership relations. The director of a nursery school should not sign a contract – it is nonsense. It is the customer who must be responsible for surveying, otherwise the following will happen, as it did in Sochi while constructing a hill for the Olympics: its estimated cost was defined as 1 bln rubles but it turned out that the slopes had to be strengthened, and the cost went up to 6 bln rubles.
In fact, any project development establishment is practically lost. And if in Moscow we have some “small islands”, in the provinces it has disappeared. It is necessary to reconstruct it otherwise we’ll never get proper regulatory design documentation. Unfortunately there is no law stating that work must be done only by an expert contractor with qualified personnel.
Which way to go
Almost everybody agrees that Federal Law ?44 lays bare the reality of the construction process. But there are different opinions as to how to correct the situation. In particular, some disagree that there is the need to develop and adopt one more law. Some experts are sure that it is possible to amend the existing one. But it is necessary to correct the drawbacks, the sooner the better, and the important thing is how best to do it.