Domestic producers take a modest 10% of the household electric heaters market. However the demand for Russian appliances will increase

It is difficult to say which method of heating is more advantageous. Every producer and salesman praises their own goods. Today we’ll talk about electric heating and appliances that warm our house or flat.

What is preferable
Electric heaters are more and more often chosen by customers as electric heating has equal heating efficiency and is cheaper.
However, operational costs over the years has become more expensive, as electric energy does not show any tendency toward becoming cheaper. However this is a characteristic of all energy sources: gas, coal, diesel fuel or wood.
There are two types of the most wide-spread electric heaters: liquid and dry ones. The basic element of a liquid electric heater is a thermoelectric radiator. Heat carriers in it are oil or antifreeze substances. They are placed into an aluminum ribbed case for increased heat-transfer area.
In dry electric heaters heating elements are placed into aluminum body, and they are considered to be more efficient and safer. According to some experts’ assessments, the economy may be up to 30% of consumed power.

Domestic or imported
The most widespread among energy efficient (up to 1 kW) and the most popular are the appliances ranging from 300 to 500 W. And what electric heaters are available to the customers?
All heaters using electric energy as an energy carrier may be divided as follows: electric oil radiators (costing from 1,500 to 40,000 rubles), electric convectors (1,600 – 50,000 rubles), infrared heaters (4,500 – 150,000 rubles), fan heaters (800 – 18,000 rubles), forced air heaters (3,000 – 30,000 rubles). The latter are mostly used for warming industrial premises.
As head of Moscow affiliate of one of the producing companies Edgar Ovsenian said, today the market of electric heating appliances is flooded, with foreign production dominating. Russian producers are far from being leaders. The market is very dependent on the season. Maximal purchases fall on September – October, minimal – from March to May. 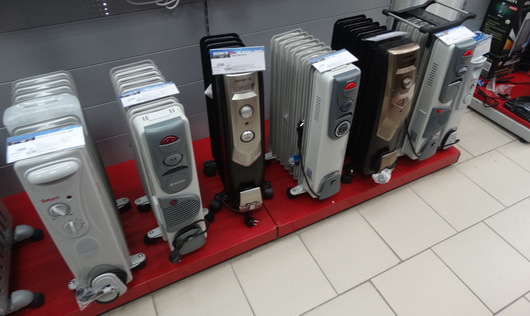 Advantages and drawbacks
During last decades our customers have created a stereotype that foreign means better. The situation is gradually changing, and the customers are buying electric heaters of not only popular Western brands, but those produced in Russia.
“Now customers focus their attention on cheap air conditioners and IR-heaters,” continues Edgar Ovsenian. “And popular oil radiators, though good in their own way, but only during the first year of exploitation. Then, grease is formed inside on the walls, and it decreases the appliance’s efficiency by 10-15%. Consequently, the heat loss will appear.”
Slight loss of antifreeze also takes place with time in heaters of that type. 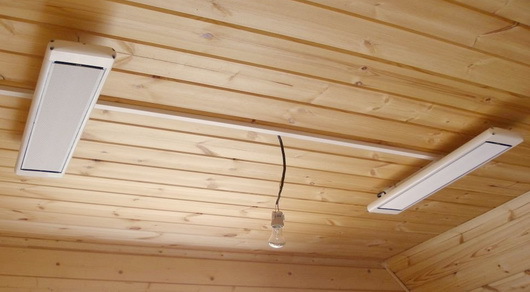 If heaters filled with oil or antifreeze are equipped with an external electromechanical thermostat, it helps control heating temperature and thus it's possible to use the heater efficiently. But such heaters have slow response. It takes 15-30 min for the device to achieve necessary temperature. If a heater is equipped with an electronic thermostat it makes it possible to save 4-5% of electric energy an hour, though the appliance itself will be more expensive.
So every appliance has its own pluses and minuses, and the energy consumption depends on the modification capacity.
Ideally modern heaters should have inbuilt climate-control, which not only keeps the given temperature but checks for the optimal (efficient) mode of heating. Such things are available only in premium segment, with systems of time of work and temperature programming.
Economy-segment heaters will only have knobs “on/off.” They are hardly energy efficient.

Experts choose the most energy efficient
Expert and internet-shop manager Vladimir Pustynnik speaks on some peculiarities of oil and IR heaters:
“There are a lot of models of oil heaters which have increased heat output almost 2.5-fold. Of course, that's if compared with the same appliances without this function.”
According to the expert, IR-heaters have their own specific features. They are quick to become cold after they are switched off, while convectors share residual heat after being switched off. But it is IR-heater which is the most energy efficient as the heat output warms not only the air but is absorbed by the floor, walls, furniture. To warm up a medium-sized room it will take 20 minutes with energy consumption of 35-40 W per 1 m2.
By the way, one should choose a heater taking into account the area of the room. Thus, a convector with the capacity of 1 kW is intended for heating 10 m2, that is 100 W is necessary for 1 m2.

Mikhail Menn: The rate for mortgage loans in the special subsidies program won’t change any more