Turkish Stream: fresh architectural ideas appeared from where they were not expected 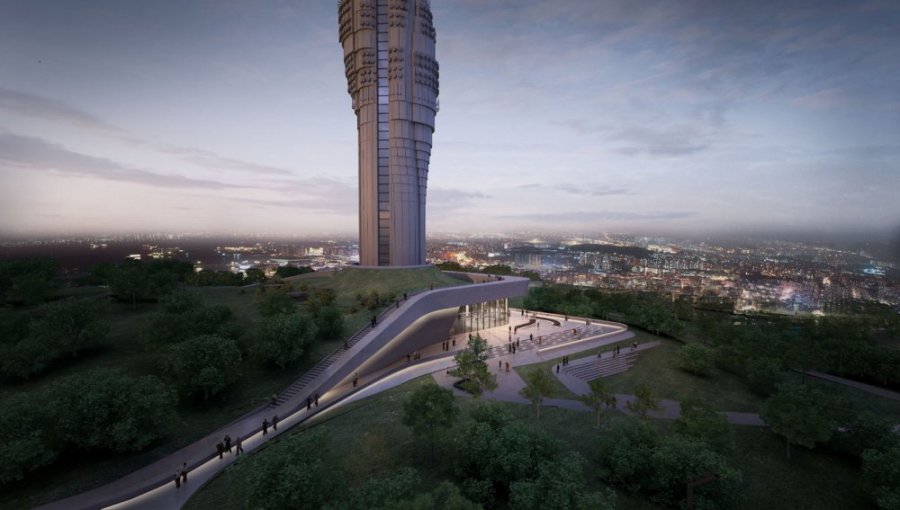 The name of Turkish architect Melike Altınışık may be not so much popular. But there are all backgrounds to correct this unfair thing in the nearest future.  Melike like famous Zaha Hadid is a representative of the “oriental wing” of modern architecture. She is young, energetic and creative. Her creado is intellectual construction. Her new materials invented in her own architectural bureau are printed on 3D-printer, she designs her projects only with the full cycle infirmational simulation, and is ready to “employ” robots as assemblers for one of her projects by writing a special program. So, Melike may be actually called an architect of the XXI century,  not just keeping up with the times, but seems to be one step ahead of it.


Melike Altınışık was the guest of the 100+ architectural-construction forum which took place in Yekaterineburg this year with the “City of future” slogan This interview has been prepared by her speech at the Forum.

TV tower in Stambul: the architecture changed in the process of construction 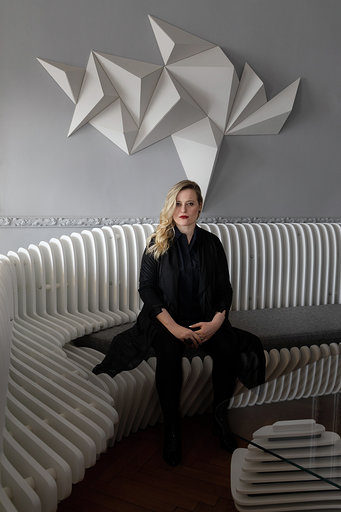 - For me as an architect and for our bureau, the moment of the project technological effectiveness. Lately, we have managed to work over a number of very interesting construction structures.

… Not so long ago, a competition was held for a new concept of a new TV and radio tower in Stambul. It was announce by the city manicipal administration. The main function of such tower-antenna is telecommunicational. Additionally, The Bosphor and city sightseeng sites are expected to be created on the upper level of the tower.

Working over the project we tried to integrate the efforts of different specialists. The data about nature played a significant role for us. We used the wind as an important source of construction information.

The Chamlyja tower is of non-standard form reminding a cocoon. To create its complicated configuration 2,300 reinforced concrete encasements developed by us. The tower is 369 meters high (589 meters over the sea level), at the foot of the building there is a capacious entrance group.

Due to the design of the tower, it will seem that the tower is in motion: its visible silhouette will change from different points of view.

The elevator divides the tower into two asymmetric halves, one facing the historical part of the city, the other - the north of Istanbul. 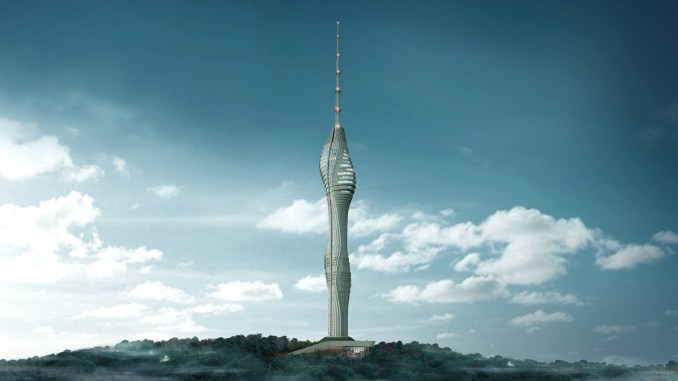 The tower was designed with the use of BIM technologies. Architects and designers cooperated with engoneers. If something was changed in the project by engineers, automatically corrections were made by architects. In fact, principles of intellectual architecture were applied.

How was the tower BIM-model formed? It was divided into several segments, and each segment was developed by specialists of different profiles. It was symbiotic work. Together, we decided on the facade colour, budget economy and at what steps we could economise.

When we used to design earlier, approaches practically did not change throughout the project. Presently, the project is constantly changing in the process of work.

And in the result we may get something quite different from the initial variant.This time we told out customer: «Let us decide on the facade solutions a bit later when the data basis is full». I am sure that such dynamic approach is more correct. That is, the project was practically born online.

…At the time of the project creation, we used another non-standard method.We have an aquarium in the office. So we used it to construct amorphous forms which were later apllied while designing the TV tower facade.

The construction technology is very interesting as well. The antenna was elevated inside the concrete displacement tube, while each segment was assembled on the ground. When we reached the top the citizens decided that we had already finished construction but, actually, we had only started it.Today, the tower is being finished, and in 2020 it will be completed. 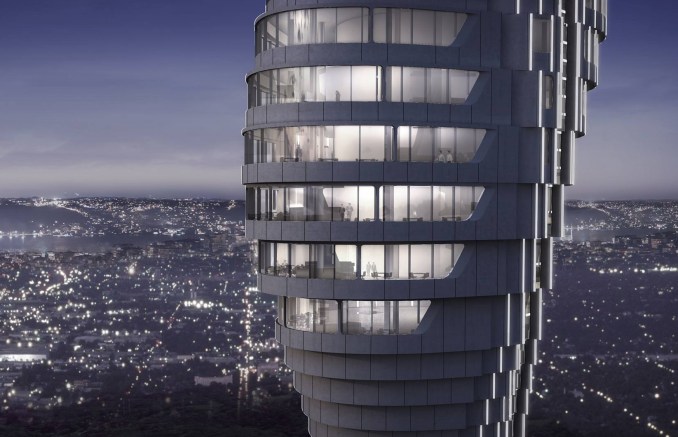 Construction ecology: it is very important

- Of course, some people are concerned about the intense radiation that the new tower will generate. Some studies claim that such radiation provokes headaches, migraines and so on.

I can only say that, of course, it would be better if such structures did not radiate anything at all. But when the government announced a competition for a new tower, semeral active antennas were already located on a hill above Istanbul.

In this case, when our tower is built, the antenna will be only one, and will emit less. And besides, it will be located on a hill at an altitude of almost 600 m above the sea level. In addition, the project uses ecologically friendly materials that reduce radioactivity to a minimum. And this, objectively, improves the environmental situation in the area.

Museum in Seul will be built by robots and drones

- Another interesting project the bureau Melike Altinisik Architects deals with presently if the Museum of robotics and science in Seul. The competition was announed for the project, it was initiated by the authorities of the South Korean capital. 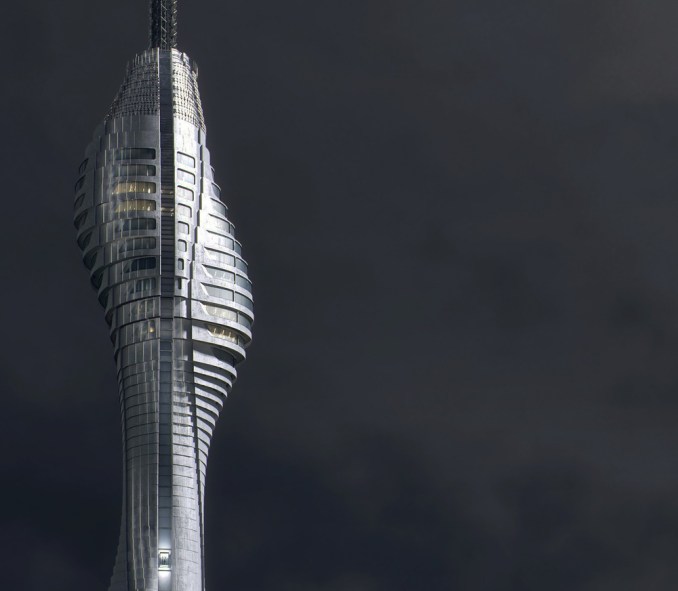 Three words – MUSEUM. ROBOTS AND SCIENCE – appeared very significant for me. Korea is known to be one of the countries, where greatest amount of money is invested in the artificial intellect development. We wanted to create not just a museum but a new Universe where architecture is not a container for exhibits but an independent exhibit showing the achievements of science.

We decided that the museum constrution will be an intellectual construction. And it was crucially important for us. We have created the intellectual construction manifesto for this building. First of all, we used an exclusive digital technology in the design. The assembly will be carried out by robots with a special program. The assembly will take place in smart hubs, special shell nodes. The Hyundai company has promised to help us with the use of robots on the construction site. 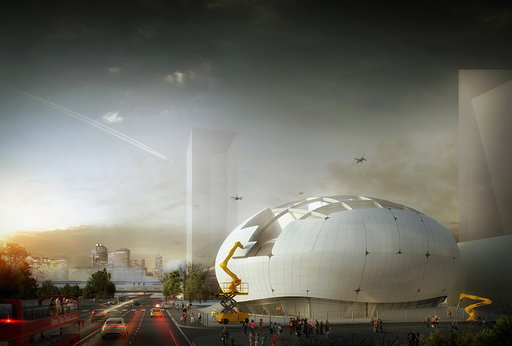 Drones will supervise the process of construction.

The Robot Museum will be interactive. In Korea, "artificial assistants" are already actively used in various fields of life. There are waiters-robots in the cafes, there are sales robots, cleaners, etc. In addition, the museum and its exposition are supposed to change constantly, as changes in our life occur instataneously.

As far as architecture is concerned, we design tunnels that will provide passage between floors, and “visual crosshairs” will links the levels (that is, being on the second level, the visitor will be able to see what is going on on the third or fourth ones).

The landscape around the museum will be decorated in a special way - with concrete shells printed on a 3D printer. Concrete reinforced streamlined shells - this is our invention, various aesthetic effects may be achieved with them. The so called “white” reinforced concrete was represented recently at the Biennale in Antalya. Such shells will help to design any public space in an exclusive way.

They look especially creative in combination with the green part. Moreover, a smooth transition from a living landscape to concrete was thought to be created in the Museum project. For us, this is a symbol of the transition from nature to what is created by man.

Why did we resolve upon doing this superproject? To tell the truth, we were not satisfied with traditional approaches and we wanted something revolutionary.

Actually, the same happened with the TV tower: we suggested the idea of module construction – to create blocks on the ground and elevate them.

Yekaterinburg should develop via succession

- I am asked a lot of questions about Yekaterineburg. I managed to go sightseeing round the city within the 100+ Forum program. And I think that it is important both to saturate the city with modern architecture and  to be attentive to the unique architectural heritage. Yekaterineburg development concept, from my standpoint, should be defined as “historism”. As for me, I’d recommend to secure continuity of development and use the valuable heritage of the city (Yekaterineburg is the "conservancy area" of architecture of constructivism, academic architecture of the Stalin period, wooden modernism of the 19th century, etc. – author's note). The original form of the city seems to have a huge power.

Сhristos Passas (Zaha Hadid Architects): It is interesting to work in Russia, but the approval process is complicated here