Russian realty - 2019: what records have been achieved? 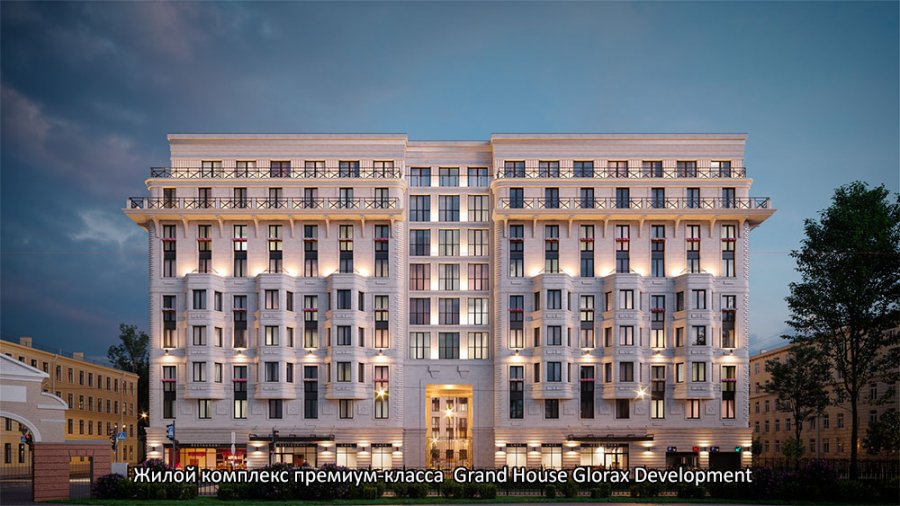 What are the market players to be aimed at to be successful? The answer to this question one could get during the Realty Market Records Prize awarding ceremony followed by a press-conference given by new prize-winners. It was here that the trends of successfulness in the sphere of construction, development and real estate selling showed up.


The festival went over big

Realty Market Records - is the annual international prize awarding ceremony in the sphere of real estate established by the Moscow Business Club. This year the Prize has been awarded for the tenth time — a kind of anniversary. The ceremony took place in the Triumph Event Hall. The festival was organized in the Oscar style: a red carpet, fascinating dresses of women-participants,  cameras’ flashes.

Almost 500 top-managers of the sphere of development, consulting and real estate business owners, journalists took part in the awarding ceremony. The winners were determined in 33 nominations in the result of three-stage voting: public voting, judging panel voting and professional community choice.

Those who presented the lowest prices for real estate, developers, who made the best family project, with the nicest architecture and most comfortable infrastructure, constructors of the best residential, commercial buildings, the creators of innovative housing projects became prizewinners.

How to sell pampered lifestyle

- We do not sell just square meters, but a lifestyle – this is the way to define the latest trend in real estate sales. In fact, nobody is interested any more in just square meters, it is a thing of the past. They must be “loaded” with attractive and useful options.

The Kortros group of companies chose the way of creating developers’ brands. One of them is the Headliner residential complex. The Head of the holding, Veniamin Golubitsky became a winner in the Person Number 1 nomination, this year. 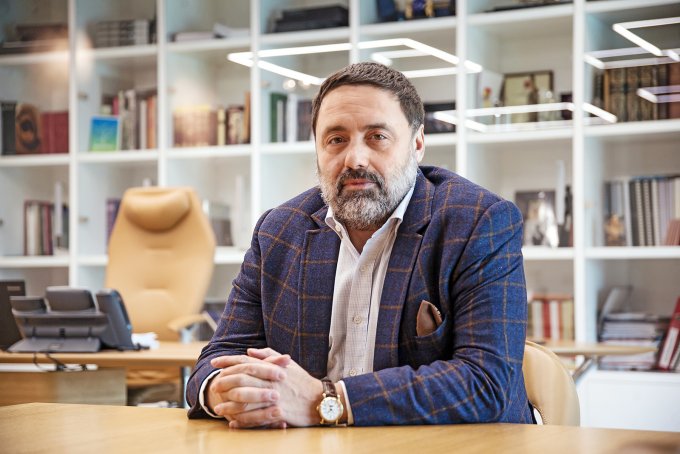 Head of the Kortros Group of Companies Veniamin Golubitsky.

- We decided to alter the approach to sales as it is, Veniamin Golubitsky says. – So we tried to create an attractive product and to promote it steadily.  «Headliner is a type of real estate where we wanted to unite people of the same worldviewЖ young, ambitious, dynamic, those who always want to be in the center of the action, at the heart of it all.

It is interesting to know that not only city developers are interested in the lifestyle to appear on the territory of the residential complex. The Primavera cottage settlement constructed by the Geometry company is located 10 km away from the city of. It is easy to understand why it has become the first in its nomination (Cottage Settlement Number 1).  There is not only a kindergarten, a beauty salon, a library, but even an art gallery. And it started to hold exhibitions while the settlement was under construction.

50 townhouses and 101 cottages are surrounded with a forest, though the settlement is located within the city boundaries.

- Close to nature! One may even see hares here, - Pavel Kostrykin, Director General of the project developing company says.

By the way, the Headliner brand provides the same set of services no matter where the residential object is located: in Moscow, Yekaterineburg, etc.

One more interesting concept of the company is the ILOVE brand. This type of housing is more for medium level managers, who have created families, have children and adhere to family values. And the brand is very much demanded.

The company professionals look further and want to create smart houses and more than that – smart districts and smart cities. 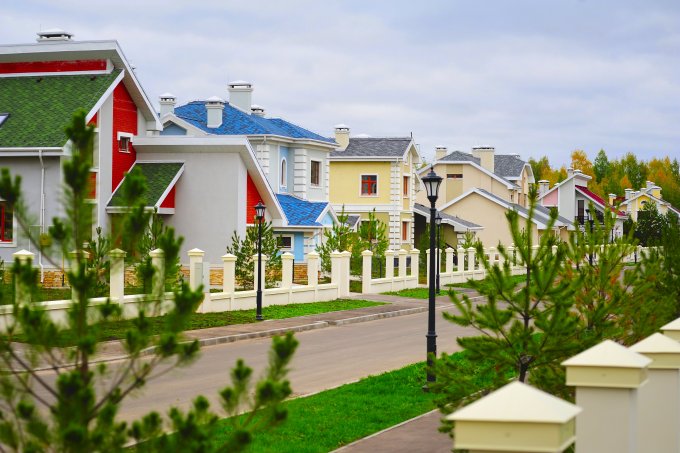 It is rather surprising, but city sky-scrapers realty is in demand now. Moscow high-rise buildings sell well. For example, Wellton Park residential compound by the Krost holding. It became  the winner in the Gran Prix nomination.

- It was a complicated object for us, - First Deputy Director General of the Krost holding, Marina Liubelskaya, says. - First of all, because it was a sky-class object. High-rise construction has different norms and regulations, demands different approaches. We have been approaching the sky-build technology for a long time having put forward the task to build the objects higher than 100 meters. It is quite understandable: the land in the city is expensive and high-rise construction is advantageous for a developer.

In Wellton Park, fit-out modules made of fibrol produced by the Krost holding plant were tried. Additionally, prestigious interior decorations in the Chanel style were introduced in the project. 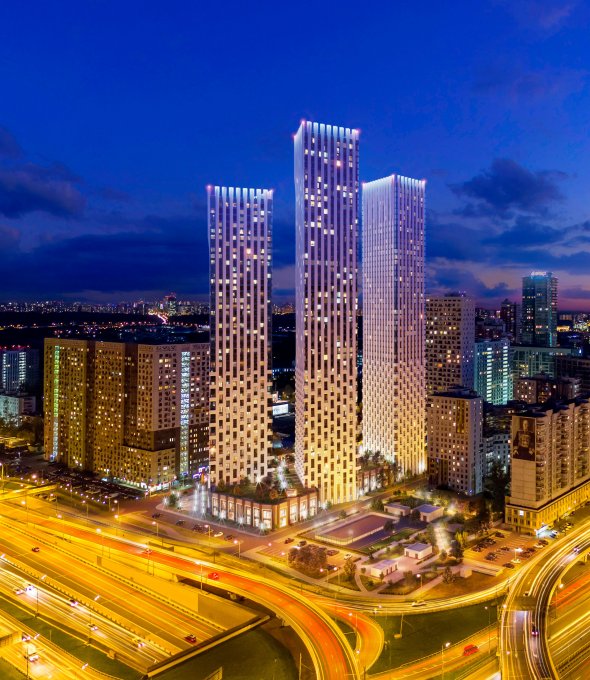 Another outstanding high-rise building – the Federation Tower – won a victory in the Sky-Scraper Number 1 nomination. It is worth saying, that this Moscow-City object has a wide range of different prizes and awards. The Federation Tower is 440,000 square meters large and has a glass roof. The building is absolutely safe: 20 fire-fighting systems are installed there, and people can evacuate from fire areas via a special staircase equipped with the systems of permanent smoke extraction.

Mikhail Smirnov, Director of the Federation Tower, dispelled a myth that the tower is “rocking”: 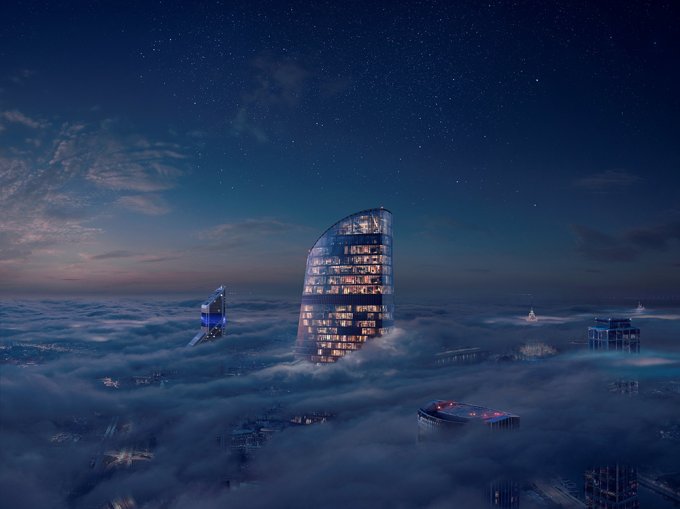 - Living in a sky-scraper, you always breath clean air, - Mikhail Smirnov is sure, – Additionally the air is cleaned, warmed and moistured in the engineering systems of the building. And do not forget about the unique infrastructure of the Moscow City with its shops, cafes, the subwae, beauty parlours where you may get without going out of the building, having your “feet dry”.

Residentials in the Federation Tower are also sold, but the demand has moved to smaller apartments: 200-300 sq.m, But there is also housing 700, 1000 sq. m and even 2,200 sq. m large for an exclusive customer, of course, because they cost billions of roubles.

Few developers in Russia are brave enough to build according to the BREEAM ecological standard. There are many “green” buildings abroad, but only a few in our country. The BEL development company decided to compete with europe. A club-house in Dolgorukovskaya str., 25 meets all standards of ecological certification. The result is winning a prize in the 5stars nomination of the Realty Market Records. 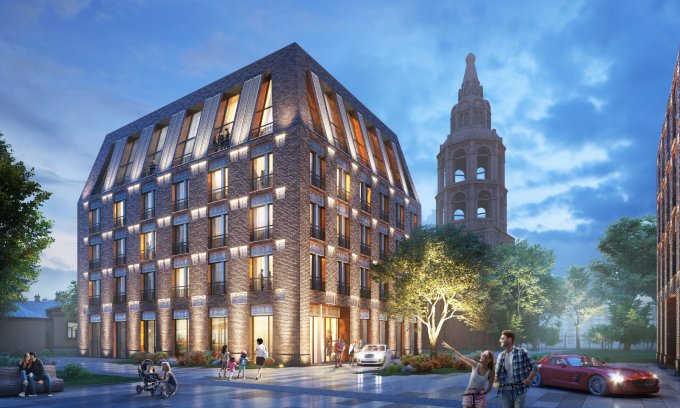 The architecture of building, not very high, of a man-friendly scale, is very “cosy”. Finishing of brick-laying matches an ancient bell-tower nearby. The building supports the spirit of the place – it used to be the quarter of artists and musicians, noe there are Musical and Artistic premises here. The object was realised in BIM which supposes the most efficient use of resources.

The club house will actively communicate with the city (it is one of BREEAM certification demands), providing citizens with different services.

- …We only overdid with parking, Elena Komissarova, Directo General of the BEL Development company says. – They are planned more than necessary: not 46 but 57. In Europe people prefer public transport presently, that’s why minimal place is left for personal cars, or even refuse it.

What does a customer choose

One of the most honourable prizes is the one awarded by the customer. The leader of the Customer’s Choice Number 1 nomination is the Oktiabrskjoye pole (October field) residential compound (RG–Development company). The complex is built upon the project of the Speech architectural bureau. It has a wonderful view to Serebriany Bor and Strogino bay. There are three kindergartens in the complex, underground parking, the territory is improved nicely.

RG–Development company managed to become first in the Developer of the year Number 1 nomination. The portfolio of the company contains 800,000 sq. meters of erected housing, 2 objects are taken into use, 7 are being built. The Staropetrovsky and the Baltiysky complexes have been put in operation. In the latter, 10,000 sq. meters of 43,000 had been sold before the sale started. 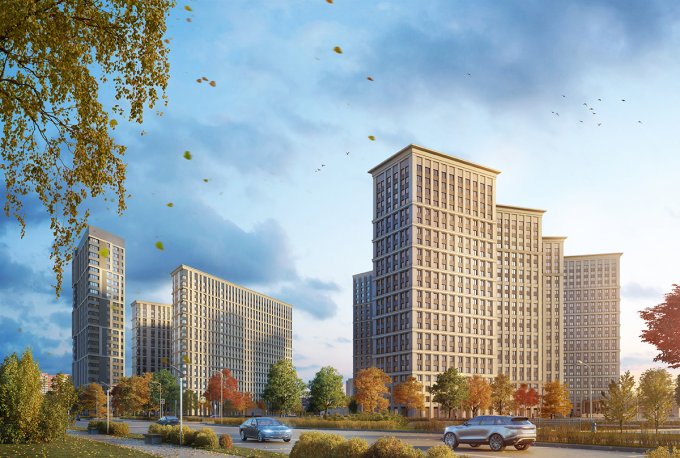 The market record-holders’ forecasts are worth listening

Of course, the journalists who came to the special press-conference after the ceremony were interested to know what successful developers and  realtors think of the ways the market shall develop in the nearest future. Will the introduction of escrow-accounts influence the dynamics of the sale. Will the decrease of the mortgage rate result in the growth of the customers’ demand?

Veniamin Golubitsky thinks that the second half-year will bring some decrease in the buying rate. As during the whole year the buyer has been terrified by the coming growth of prices the demand has been stimulated a bit. And presently, the potential of high demand is exhausted.

The new system of construction financing is known to be introduced since July 1, via escrow-accounts, and construction will be controlled by banks. It is supposed, according to legislators, to solve the problem of hoodwinked investors.

- Due to the introduction of escrow accounts all companies try to save “cash” - a kind of financial safety cushion, - Commercial Director of the Moscow territorial department of the Etalon Group of Companies, Vasily Fetisov, says. – Our company is ready to work with escrow accounts, we do not foresee any difficulties in getting money via escrow accounts.

The prices of square meters have grown, nevertheless. In the Moscow region, the growth is about 9%, and the prices are supposed to increase. According to Elena Komissarova, Director General of the BEL Develoment company, the growth may be 10-12% and even higher. 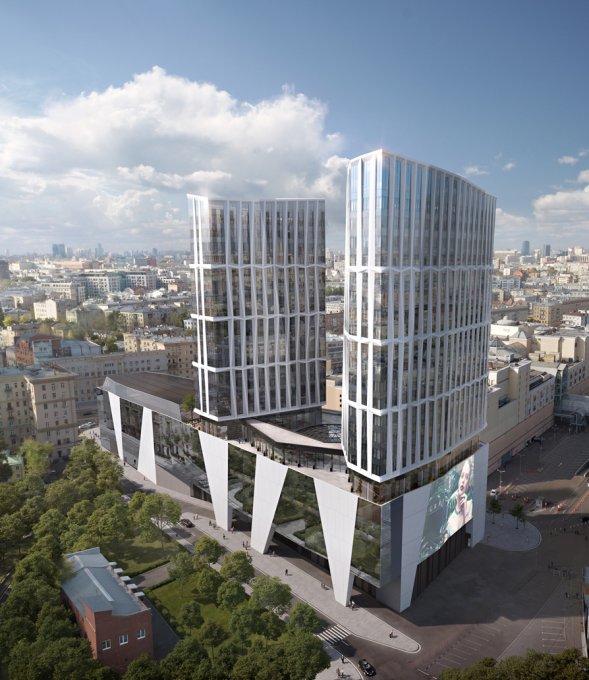 Speaking about the decrease of the mortgage rate to 6%, Veniamin Golubitsky (the Kortros GK) thinks, that «…such rate is sure to influence the market, but not only mortgage should be taken into account. Developers must work with other factors of price decrease – construction digitization, BIM».

Pavel Kostrykin’s (the Geometry company) viewpoint is very critical. He thinks it a mistake to introduce escrow accounts (“They will soon understand what they have done...”).

Yana Sosoreva, Commercial Director of the RG-Development company shared her ideas on the necessity of amendments to the new laws. Thus, presently, unless a developer fulfills his obligation, a customer will receive compensation of only 10 m roubles. And two- and three-roomed flats actually cost much more. It means that the customer shall not get his money back.

On the whole, the market players’ expectations are moderately optimistic. So much has happened during the previous decades that the new turn, the introduction of project financing, does not cause any panic. Developers have acquired a priceless ability to adapt to the suggested circumstances. And this is the way to survive on the complicated market of the Russian realty.

The full list of the Realty Market Records prize winners see at the link.

Buying with a practiced eye irrespective of a developer’s reputation

Moscow real estate: if there is demand, there is housing

Expert opinion: what does a client choose on the real estate market?

Expert opinion: The crisis in the construction industry will get stronger