OSM 2015: Foreigners want to launch production in Russia but they get almost no help from Russian banks

Those who visited the 16th specialized exhibition of construction materials, ‘OSM 2015’, were very much surprised - it turned out to be much smaller than it used to be. Only one floor of the Expocentre pavilion ? 7 was occupied with stalls.


— This year we didn’t take the risk of inviting many people, one of the exhibition providers told us. – The crisis and the ruble’s floating rate made us doubt the participation of a number of major players at the construction market.
The providers’ assumption, fortunately, was wrong: there were more companies wishing to take part in the exhibition than they had expected. So there were problems with floor space.
— Our company’s exhibit was somewhere in the “outskirts”, in the third or fourth row, complained a representative from the company ‘Vibropress’. – We were told that there were no places. And there were many companies which wanted to exhibit their products.
The brick with the Russian national emblem
Both participants and visitors were many: from the second day of the exhibition, the halls were crowded. The production of numerous ceramic plants was most eye-catching. Ceramic bricks of different kinds and colors lay everywhere in bright decorative piles. Ceramic blocks – also bricks but large – were placed on podia. Our journalist tried to lift one of these 30kg jumbos, but didn’t even come close.
— By the way, large-sized blocks are in great demand now, a representative of Austrian Wienerberger told us. — At first, Russians only vaguely knew of our products, and now they use them enthusiastically. Such blocks do not need insulants, and besides their use reduces the time multiply buildup. The only thing necessary here is a small erection crane to ease the work of constructors.
The Austrians have few competitors in this niche, says the German company Braer, also producing large-sized hollow ceramic blocks. Besides, the German company produces a whole line of ceramic brick – from front brick to colored, produced according to individual orders.
The mount with hand-formed brick attracted a lot of visitors. The simplest components turned out to work magic. Glass sand, clay, coloring: the mix is placed under the press, and a uniquely distressed brick is the result. Any and all of a designer’s fantasies can be realized with such material, said Sergei Kruzhalov, a representative of the company. – There may be an antique finished fire-place, a decorative wall etc. Spalls, cracks and crazings [??? – MARK] only add charm to the ceramics.
The De Boer company produced bricks moulded with the Russian national emblem, and also bricks with bears and reindeer, found in the emblems of many Russian cities, especially for the exhibition.
Why limestone brick producers ‘quarrelled’ with cerami?s producers
Unfortunately, the producing plants’ mounts looked much poorer. 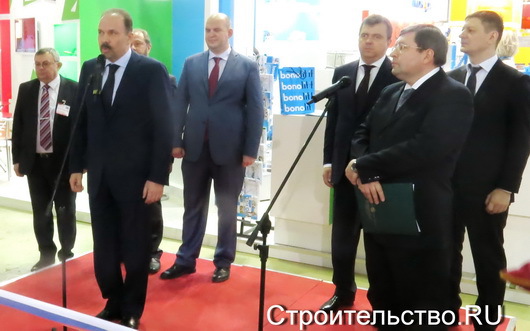 - The ceramics companies have beaten us with their production volumes, confessed Svetlana Solodkova, the marketing specialist of a big limestone brick plant in the Tver region. – I’m ready to believe that there is a ‘ceramic lobby’, promoting ceramic product to the market. But our brick is not at all inferior!
In fact, the situation for the limestone brick market has been far from positive lately. Limestone brick sales are decreasing while ceramic brick is becoming more and more popular. However, almost all buildings in Russia have been made from white limestone brick, from Stalin-epoch skyscrapers to Russian provincial dwelling stock.
— Of course we have problems with marketing, admits Nikolai Somov, the Head of the Limestone Brick Producers’ Association. – But I think they are temporary. Our product will bear the setbacks. We have united in the Association to promote our product more actively.
Besides, limestone brick is preferable in the construction of budget objects (i.e schools, nursery schools, hospitals) because it is environmentally friendly (it consists only of natural components – glass, sand, lime), and it is long-lasting and reliable.
Limestone brick producing plants are now experimenting with color and offering products in dozens of colors. They are also trying to diversify the dimensions of limestone blocks.
So lime-stone brick producers are not going to lose ground…
Can’t you? We’ll teach you!
Some construction companies cater to the private housing market, while others prefer multi-storey housing. The company Bonolit & Poritep, presenting a big stall at the exhibition, is aimed at both markets, and it seems to have paid off. The company produces gas-concrete blocks of different sizes. For low rise building they produce bonolit with a density of 400 kg/m3: light, reliable, and with good heat isolation characteristics. For multi-storeyed buildings, they produce poritep: heavier, with a density of more than 500 kg/m3. Last year the company held one third of the gas-concrete capital market and are planning to branch out with a new plant to produce gas-concrete blocks.
The company has its own training school to teach people how to work with gas-concrete. They also have an erection supervision service.
Salvena Consulting is also is a kind of ‘training’ market player. But it teaches new technologies used in ceramic materials production (not new techniques for material processing): it organizes consultations, helps to implement new techniques and to advance old ones, and advances manufacturing processes. The company represents the world famous ‘Serik Technology’ brand in the Russian market. The Russian construction industry needs innovations; thus all such new ideas are most welcome.
To build a modern plant: an impossible wish… 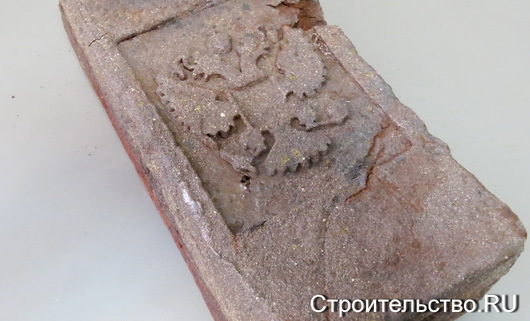 In spite of the sanctions, dozens of foreign producers came to the exhibition and shared the problems they had come across in these new economic conditions.
The representative from SRL Inkeram, Jacques Testa, promised that their company is not going to block projects in Russia. One of the large-scale projects in its portfolio is the construction of a brick plant in the Belgorod region. Inkeram delivers technological lines for ceramics production. According to the executives of the company, the company has a great need of Russian brick production. But difficulties arise at the credit line opening stage – from the Russian banks, not the foreign ones.
— We’ve got a client, Jacques Testa told us — He has done a great deal of work: he found a manufacturing area, he had the base material certified, he laid the foundations for a new production line, but he didn’t manage to receive credit from a Russian bank. The company tries to help Russian businessmen to ‘make a bridge’ between Russian and foreign financial systems. But such attempts are not always a success. Nevertheless, as Jacques Testa put it, it’s not all bad, and our foreign partners hope for a fast settlement of this issue.