American construction and traffic engineers sound the alarm: the country’s infrastructure is decades behind the times. What’s the reason?

American highways, bridges and road junctions used to be standards for the rest of the world to follow. But gradually the situation has changed…


We are used to thinking of America’s endless spacious highways and famous bridges and viaducts as examples to emulate. And it must be said, it has been so for decades. But what is the current situation regarding traffic infrastructure and facilities in the USA?
Everything in the garden is rosy, or… 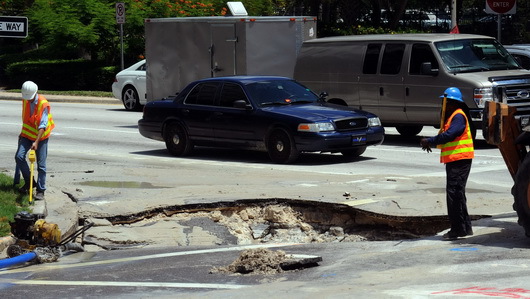 Published in the spring, the data on the situation in the USA’s construction industry can’t but bring about our admiration. In fact, the industry seems to have woken up after its long sleep of the previous years, caused by the crisis. Thus, by December 2014, construction expenditure had reached the sum of $982 bln, the highest amount for 6 years.
For the first time since 2009 there has been progress in state financed projects. Only this January, 39 thousand jobs were created in the industry. The unemployment figure is the lowest for several years – 9.8%. In January 2007 this figure was 12.3%.
Everything seems to be good. However, if we study the results of 2014 and the first months of 2015 closely, we see uneven distribution of progress in the construction industry. For example, the construction of warehouses has increased by 50%, apartment buildings by 34%, and office retail buildings by 24% and 16 % respectively.
If we consider the data on infrastructure objects, progress is much more modest: port and airport construction has grown by 4.9%, highways and roads by 4.1%. Experts are sure that this is not enough.
…is it time to ring the alarm bell?
In many articles and reports, politicians, economists and experts say the modern American infrastructure is “ageing” and “growing obsolete”. “Forbes” cites Joe Biden, the US Vice-President, from one of his recent meetings: “How can we have the economics of the 21st century but the infrastructure of the 20th century?” It has happened as a result of a lack of financing. As the “Economist” remarks, the GDP share of state investments into this industry has been constantly decreasing for 50 years. Now the USA is spending as much on infrastructure development as little Sweden does!
The US Secretary of Transportation, Anthony Foxx, is sure that “it’s time to ring the alarm bell and to get ready for imminent problems”. In his recent report on the condition of American infrastructure, he recalls the fact that the national highway network was founded 60 years ago, when Eisenhower was President. And it’s in great need of serious updating, especially if we take into account that the population of the country will grow by 75m people by 2045 and the volume of transported cargo by 45%. So, the infrastructure load will increase greatly.
Even now the most highly developed country in the world suffers from a significant lack of transport lines. And the money allotted by the state is hardly enough to maintain the existing roads. The former Secretary to the Treasury, Lawrence Summers, calls such investment volumes “marking time”. But even this assessment is likely to be too optimistic: according to data from the US Department of Transportation, about a quarter of all bridges in the country need serious maintenance and 65% of American roads need improving. 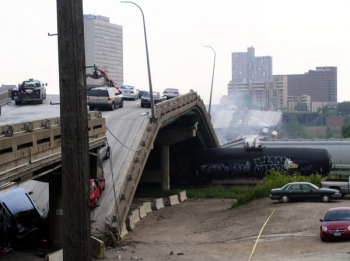 Disappointing figures and serious problems
According to calculations by US Civil Engineers Association specialists, in the next five years it will be necessary to invest $3.6 trl in infrastructure projects – almost twice as much as now. The lack of investments is the main (but not the only) problem. It is necessary to distribute the money correctly, and to apply innovative methods of construction to make it cheaper and to decrease the terms of putting into operation new infrastructure projects. And it must be done as soon as possible, claims the head of the Caterpillar company, Doug Oberhelman. Now is the most favorable time, while petrol prices are low and asphalt has become cheaper as compared with last summer, the business representatives think.
Last year the US National Association of Manufacturers (NAM) conducted a survey among 400 top managers of industry companies on the contemporary state of the country’s infrastructure. 70% of those questioned consider it “medium” or “bad”. 65% assume that the infrastructure in their region doesn’t meet the demands of economic development, now and for the coming 10 to 15 years, and everything possible should be done to change the situation. A year earlier there was a survey among the heads of companies in the oil and gas industry. It showed that 87% think that obsolete infrastructure is negatively influencing their business, and 10% claimed that it is a serious problem for their business. 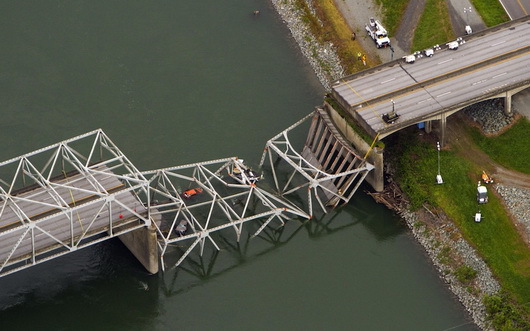 A painful blow to American ambition
Americans, who are used to being the first in everything, were shocked by the information announced at the recent World Economic Forum. It turned out that, as far as investments in transportation infrastructure are concerned, the USA moved from 7th to 18th place and are at 19th place as to the general state of infrastructure - behind many other countries, such as rather modest ones like Poland, Estonia, Hungary, Slovenia and Greece.
It is even more painful to lose to such a rival as China, systematically investing significant money into the development of transportation infrastructure – roads, bridges, tunnels. And the point is not so much the investment volumes, but the fact that China, India and some other countries in Asia and Africa are actively constructing new modern infrastructure objects which trump 50 to 60 year old American ones in terms of design, materials and technologies.
Having evaluated the tricky situation in the transportation infrastructure sphere, which may have serious consequences for the future development of the American economy as a whole, this January President Barack Obama announced a plan according to which $478 bln is to be invested in infrastructure development. What is Obama’s plan for upgrading the US’s transportation infrastructure? Where does the President hope to find the money for its implementation? What are his chances for Congressional support? And lastly, how will the life of the common American change as the result of such activities? You may read about it in the next issue of our magazine.

Irene Tolstikova, our correspondent in the USA

Construction complex: what worries the heads of companies?

PPP in road construction: how to save private investors’ money in case of a project suspension