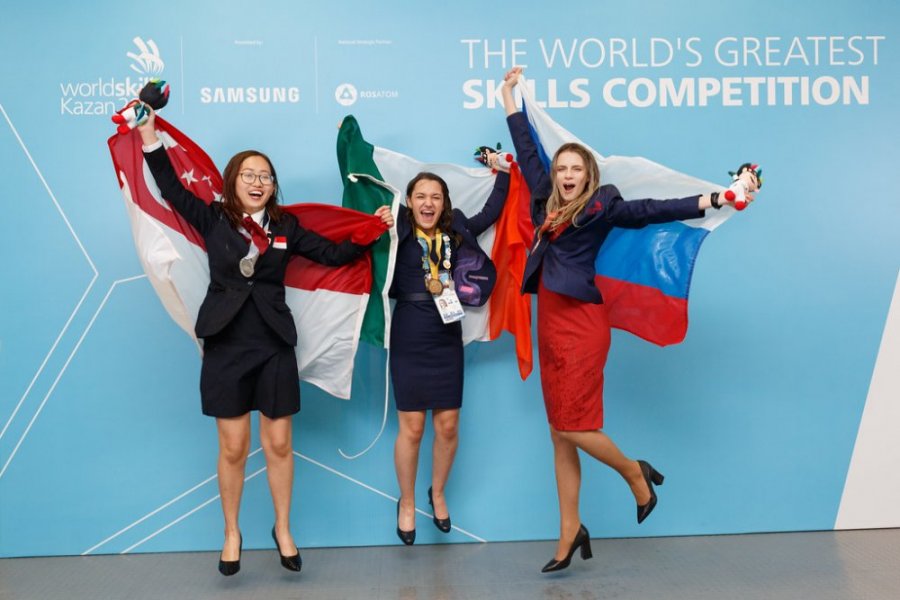 WorldSkills is the movement uniting young professionals from all over the world. They demonstrate their high-level skills in the sphere of their activity.

Russia was the host country of the world championship in vocational workmanship for the first time.   WorldSkills - 2019 took place in Kazan within the period from August 22 to 27. 1354 competitors from 63 countries of the world came to the capital of Tatarstan to take part in the contest. During four days, they competed in 56 competences united in 6 units: information technologies, civil transportation, industrial production, construction, services, art and design. It should be mentioned that the authoritative skills competition has been one of the most large-scale international events in Russia in 2019.


Russia took up the WorldSkills’ torch from Abu-Dhabi

WorldSkills is the international movement including 80 countries-participants. It initiates the arrangement of vocational competitions of different levels for young people aged under 22, thus attracting their attention to working professions and jobs, and providing for the development of high professional standards. That is why the WorldSkills contest is called Workers’ Olympiad.

Russia took up the torch of WorldSkills from the United Arab Emirates (UAE), where two years ago representatives of Russia received the flag of the world championship of vocational mastership. Over these two years the flag “visited” the space station, “marathoned” round 20 countries – former hosts of the championship, and even got to the North Pole. 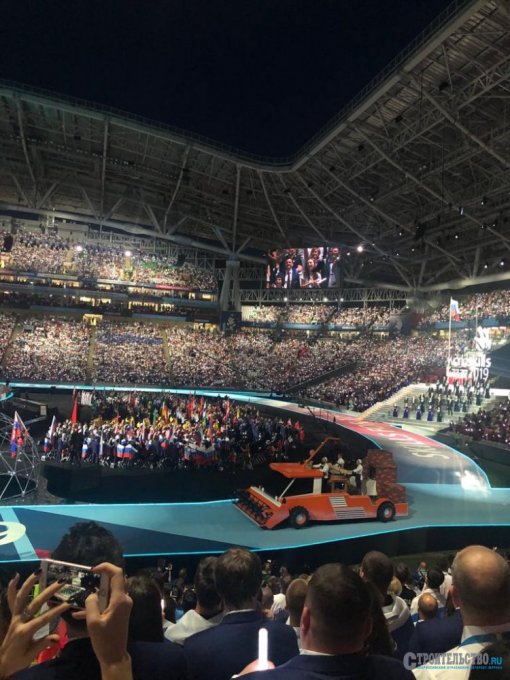 … The 45th world championship in standards started with the colorful solemn opening ceremony on the Kazan-Arena stadium. It lasted more than two hours. The guests were impressed by the parade of 63 teams and a show with the elements of augmented reality and colorful mapping.

- WorldSkills has already become not only a competition among young workers. Actually, it is now the championship of the future, Dmitry Medvedev, Chairman of the RF Government spoke at the opening ceremony. People from different countries and of different cultures can work together, compete and communicate, of course. It is the future where there is space for creativity and discoveries, friendship and new victories. And the main thing is that the most useful skill for the man of the 21st century – a habit of learning to find a proper profession to one’s liking and become a professional. 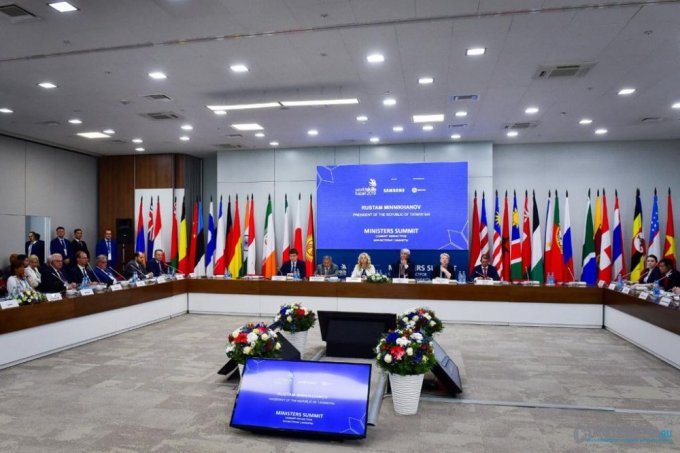 On the day of the championship opening a large press-conference took place. Tatiana Golikova, Deputy Chair of the RF Government and Chair of the WorldSkills Kazan – 2019 organizational committee; Simon Bartley, President of WorldSkills International; Robert Urazov, Director General of the Young Professionals Union (WorldSkills Russia); Rustam Minnikhanov President of the Republic of Tatarstan, and David Howe, Executive Director of WorldSkills International took part in it. VIPs of the global and Russian WorldSkills movement discussed further development of the vocational training.

Moscow and the Republic of Tatarstan were represented widely: 15 participants from each region, 4 participants were from Tiumen and Cheliabinsk regions, the Krasnoyarsk region was presented by 3 participants, the Krasnodar and Sverdlovsk regions sent 2 participants each. The rest 18 regions of Russia had one representative each in the joint team of the Russian Federation. 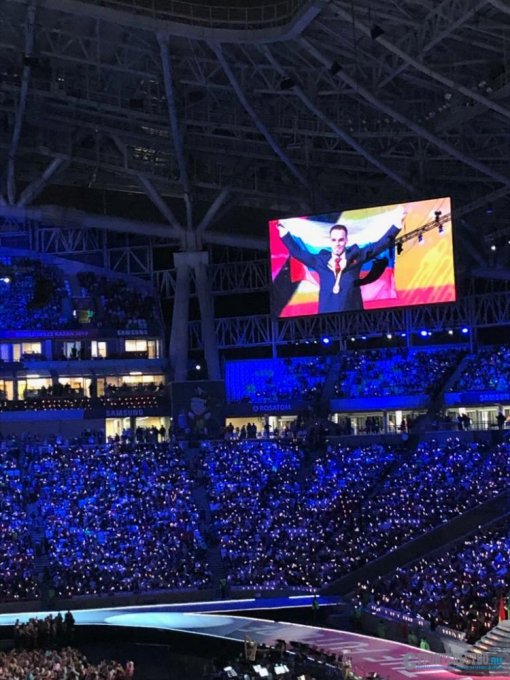 Professional working with wood and stone made magic

…The championship took place in 195,000 sq. m large Kazan Expo exhibition center which was built especially for the occasion.

One of the most interesting sections of the event was the one dedicated to construction competences. Its program included Concrete works, Architectural stone processing, Walls and floors finishing, Brick laying, Plastery and finishing with plaster slabs. Specialists working with wood and stone competed showing their mastership there.

It should be mentioned that many large companies, e.g. 3M, Volvo, Saint-Gobain, Mitutoyo, Mantrak Vostok, etc., became partners of the event and supplied it with construction materials, equipment and heavy machinery.

The arrangers of the fest provided the participants with great creative freedom: professionals working with wood made wonderful wooden sculptures with electric saw; those who worked with brick were suggested to make curlicues of brick. And plaster slabs assemblers managed to mount the slabs on the most artfully bent structures.

The competence of Heavy machinery maintenance and repair was supervised by the main partner of the Championship of WorldSkills Kazan- 2019— the Volvo Construction Equipment company.

The results achieved by the Russian team speak for themselves: young professionals in the sphere of construction won gold medals in the Plaster slabs decoration nomination, silver medals in the Electrical installation work competence, and bronze ones in the Walls and flooring tiling competence. Medallions for professionalism were awarded to the participants in the competences of Heavy machinery equipment, Architectural processing of stone and Concrete construction works. The jury of the championship remarked that the mastership of young Russian builders grows from competition to competition. 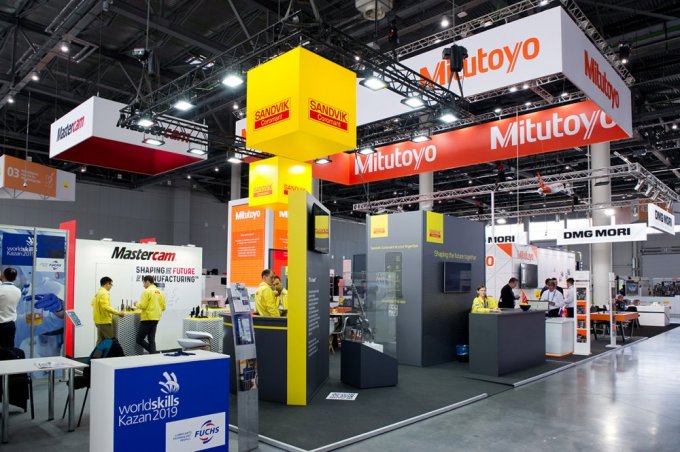 Who of the Russians won in the championship?

The result of the Russian national team was great: it won 14 gold, 4 silver and 4 bronze medals. In addition, 25 medallions were awarded for professionalism So the team took the honorable second place as to the number of medals. The first place was won by the Chinese team which was perfect, and the third place was taken by the team from South Korea. The winners were awarded their prizes at the solemn closing ceremony which took place on the Kazan Arena.

- It was for the first time that Russia hosted the competition of the best professionals of the planet. And it became the largest and the most representative in the history of the movement, a colorful and unforgettable event, where all possible opportunities were presented for fair and honest struggle, for friendly communication between spectators and participants from more than 60 countries of the world, Vladimir Putin, President of the Russian Federation spoke at the closing ceremony. 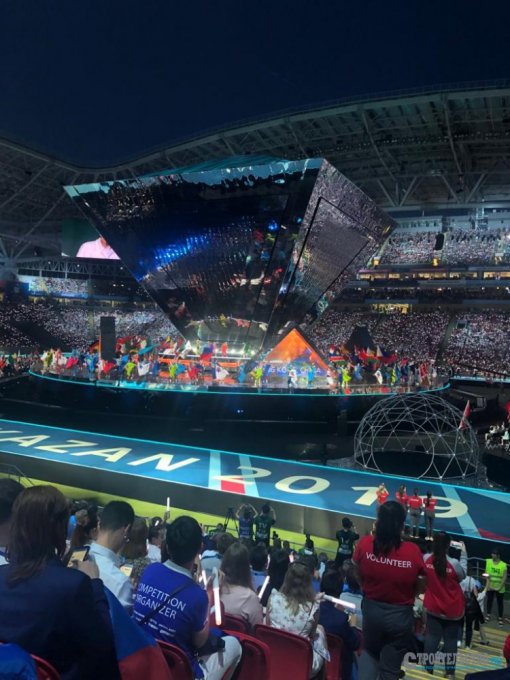 Anastasiya Kamneva, who received a gold medal in the competence of Laboratory-scalechemical analysis, was admitted the most high-performing participant of the world competition and was the first Russian specialist awarded with the prestigious prize named after Albert Vidal, a Spanish founder of the WorldSkills international movement. 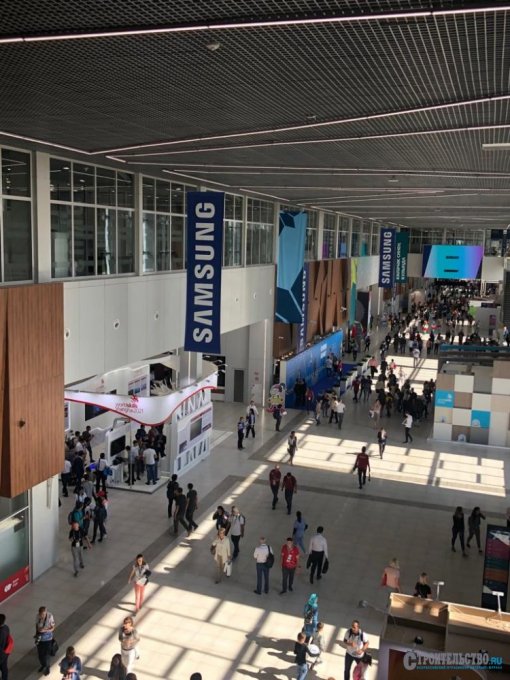 And Mikhail Vorontsov, participating in the competence of Milling work on the CNC-controlled machines, was awarded the title of the Best of Nation.

- Presently, we may say that WorldSkills has become an important element of the advanced system of vocational training which Russia is forming, RF President Vladimir Putin remarked at the closing ceremony.

…In the end of the WorldSkills closing ceremony the flag of the championship was handed the Chinese representatives. WorldSkills 2021 will take place in Shanghai.

- It is a good tradition for our company to take part in this competition. We have supported the WorldSkills movement for 10 years already. It is our global priority. Young professionals who will build houses must be able to apply our materials correctly. They start using them while getting ready for the competition and while training, and later they have every opportunity to evaluate their quality in the course of competition program.

Getting used to good quality construction materials, young professionals choose right technological formats which is very important for increasing the quality of construction work on the whole. 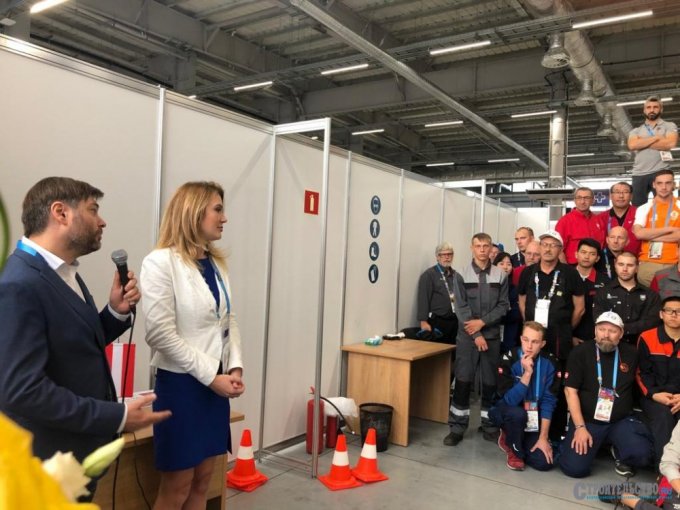 - WorldSkills championship for us is mainly an opportunity to take care of our customers and dealers. Working in Russia and the CIS countries we see the main problem of our customer: it is the lack of manpower. In our sphere it is the lack of operators and mechanical engineers (it is the reason why we supported the initiative of creating an operators’ club popularizing the profession of an operator). When we learnt about the WorldSkills movement and saw mechanics in its schedule we decided to support this great vocational contest.

Without exaggeration, we got involved in the project. And we are eager that our young professionals were enthusiastic, we want them to understand that their profession is highly demanded, and being a mechanic is quite fashionable. One can like the vocation and earn well. …We communicated with an international manager in our competence from Canada, he is a teacher. He told us that the medium age of a highly professional mechanic in Canada is 24. It means that our participants (age limit at WorldSkills is up to 22 years old) are at the professional peak threshold, they are demanded on the market.

Such competitions are very important for the country as well. The championship is a great site for vocational-oriented education! Schoolchildren can see here what usually takes place behind the closed doors, at workshops and plants. And it may be here that children would understand what profession they would like to choose for life. 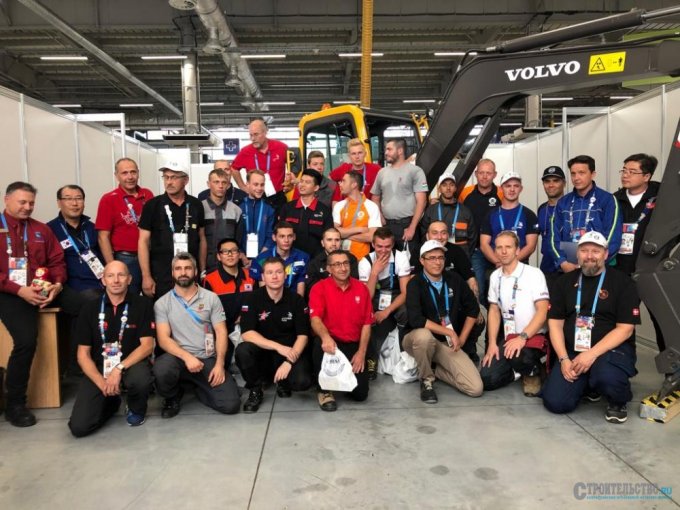 Special representative of the Mitutoyo company:

- WorldSkills for us is the popularization of metrology and of our brand.  In addition, we try to introduce our metrological system in educational programs presenting our measuring equipment for educational institutions and vocational competitions.

Taking part in the contest is advantageous for the country as well, it gives an impulse to the development of plants and factories providing them with qualified employees. And the, in its turn, all this influences production quality improving it. And everybody wins… 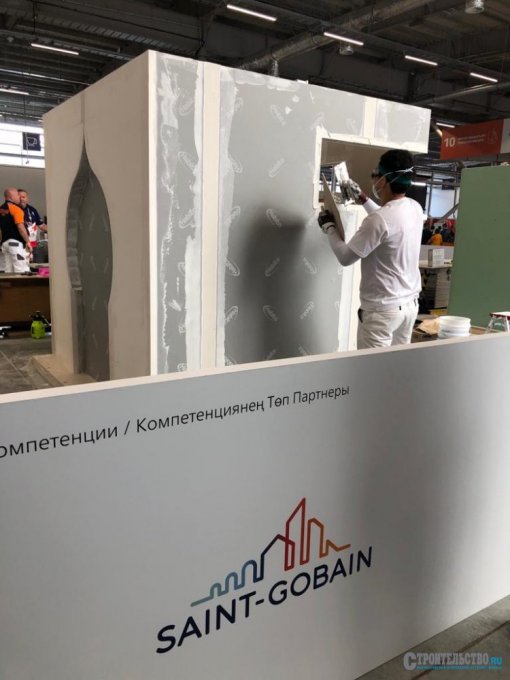 - At WorldSkills competition, we take part in several competences. For one of them – Heavy machinery service - we provided two push-type scrapers Caterpillar D5R2 and two excavator-loaders Caterpillar 426F2. Participants of the contest were supposed to find malfunctions which were introduced on purpose, and repair them in the shortest possible time.

We invite all participants of the contest to consider our company as a potential employer, we work in many regions of Russia and want to have excellent professional in our team. Participation in WorldSkills for us is an opportunity to show people that construction equipment develops. Our brand is developing fast, we implement various innovative things which are interesting for the future generation. We organize many events for schoolchildren and students, and we develop our specialists professionally, meaning we are ready to take any technician and train him for the purposes of our company. 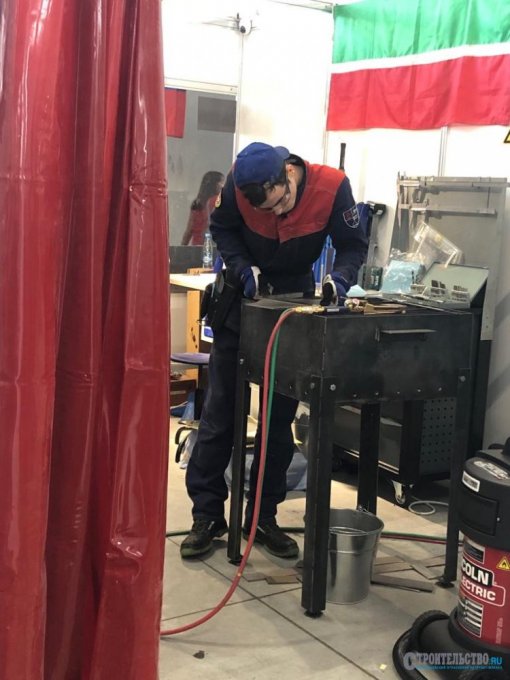 Road construction: based on innovations and the international standard

The rouble rate: to fly up or to land?

What restricted the work of Russian constructors in 2016

A battle for cadastral registration: who will win?