Up to 2014, the cement market had been developing rather rapidly, but now, due to certain reasons, it is far from being healthy. Experts’ market volume assessments are different but the general tendency of decreasing cement production is beyond doubt, and all producers are experiencing it.


What we had and what we’ve come to
From 2010 to 2013, production volumes grew by 11% every year. But in 2014, according to the information of the CMPRO consulting company, they increased by only 3% and made 68.4 million tons (fig.1). At the same time, consumption of the material grew by 2.7%, equaling 71.5 million tons. The lack of domestically-produced materials was made good by imports, but didn’t exceed 5 million tons.
Fig. 1
The volumes of cement production in the RF in 2009—2014.
Source: VVS information analysis company 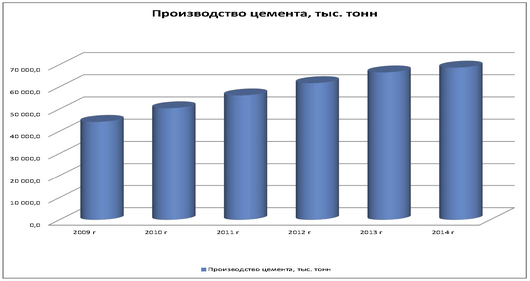 During the first four months of this year the tendency for the production volume decrease became explicit when compared with the same period of last year (fig.2): by 9%, to 15.8 million tons, and in April there was a real fall – by 16.3%, to 5 million tons. The expression of themarket in monetary terms in January-April was reduced by 10.1% to 62.2 bln rubles, and in April by 17.1%, to 19.7 bln rubles.
Fig. 2
Dynamics of cement production in the RF in2009 — 2014.
Source: VVS information analysis company

Correspondingly, cement imports also decreased. According to the data from the Rating Agency of the Construction Complex (RACC), in the first quarter cement imports decreased by 2-3%.Last year it was 10-12% of the total volume of the market, and during the year it fell by 82%, from 815,000 to 147,000 tons. The principal cement importers to Russia are Belarus and Lithuania, with 29% and 22% of the total import volume, respectively.

Leaders and prices
The leaders of cement production in Russia are still the federal districts, with the Central FD producing 24%, the Volga FD with 23% and the Southern, producing about 17% of this construction material (fig. 3). It is no wonder that in these three regions prices for cement imports decreased most of all – almost by 90%.
Fig. 3
Cement production in the RF Federal Districts in 2013—2014.
Source: VVS information analysis company

As far as cement prices are concerned, the weighted average price for cement from 2014 amounted to 3,873 rubles a ton.
— In December there were negative expectations for different construction materials, Mikhail Menn, Minister of Construction, Housing and Utilities, reminded journalists at an All-Russia conference entitled “The situation in the construction industry”— Now we see that the significant growth of domestically-produced construction materials prices turned out to be the consequence of resellers’ gambling on the unsteady economic situation. Now we can confidently say that the prices have returned to their pre-crisis level, and even lower for some construction materials.
The minister was glad to say that according to information from the Federal Antimonopoly Agency, the prices for cement decreased by 3.4%.

Consumption
Nevertheless, due to objective reasons, since the beginning of the year the cement market has shown a significant decrease. According to the estimates of the Cement Producers’ Union, the market decrease by the end of the year may reach 5-7%.
As far as consumption is concerned, according to the RF Federal Service of State Statistics, cement consumption in Russia in January–April of 2015 decreased by 11.4% to 16 million tons.
— Of course it is connected with the decrease of housing construction volumes, the Director of Housing Policy Department in the Ministry of Construction, Housing and Utilities, Gayane Kizaryants, explained. – In 2015 the housing construction decrease may reach 10-15%.
It is connected with the decrease in mortgage loans and the reduction in the population’s demand.
Last year a record volume of housing was constructed in Russia – 83 million square meters. If we consider the estimates of a 10% fall in housing construction volumes, 75 million square meters will be built this year, and it means that cement consumption will stay at the level of 70 million tons. If housing construction volumes decrease by 15%, it will require, of course, even less cement.

Donotlosehope
Meanwhile, cement producers are trying not to reduce their output volumes. They connect their hopes for the positive development of the market with anti-crisis measures adopted by the government, and the 12% mortgage loan subsidy in particular.
This year, the process of cement import reduction will go on within the framework of the import replacement strategy and the introduction of obligatory certifying cement (the corresponding draft law has been prepared in Ministry of Industry and Trade); this will allow Russia’s leading producers to stay afloat.
We must remember another stimulating factor – the World Football Championship 2018 construction. Though budget allocations for the Championship have been reduced, and there were talks on depriving Russia of the Championship, none of this concerns stadiums and infrastructure construction for the sporting events.
Housing construction, though reduced in volume, is still one of the main growth factors for cement producers.
According to the Ministry of Construction, Housing and Utilities estimates, by 2020 cement demand in the home market is to grow to 97.8 million tons. International analysts do not assess annual average growth to be more than 3-4%, and predict reaching a volume of 86-87 million tons by 2020.
Besides, experts see positive prospects in the industry consolidation in the framework of the EEU. According to them, it may result not only in the concentration and consolidation of production, but will provide for the attraction of significant investment for cement plants’ up-dating.


Expert opinion
Nina Avdiushina, Sales Director of Holcim (Russia)
The market for cement is not a separately operating and developing market, where producers stuff their pockets with money. It is quite a sensitive mechanism influenced by a great number of factors, mainly of an economic character.
Now we see the decrease in the real income of the population, credit granting reduction, falling demand for housing, andeven the temporary suspension of some construction projects. According to our estimates, we’ll see market stagnation for several years. There is a high probability of rather a steep fall in the market following the mortgage loan and housing construction decrease. We see it now, according to the results of work in 2015.
In the current conditions every cement producing company must be very careful about production and sales. Producers sometimes seem to be interested in up-to-the-minute results: they create oversupply in a decreasing market, lower prices to prime-cost, and offer post-payment for clients with bad credit history. Is this the way to a civilized market? This is the road to nowhere, to indigence and further bankruptcy.
The cement industry is very capital-intensive and requires large investments to maintain production in operational conditions and to invest in new production and development. And it is necessary to get income for that. Speaking of prospects and necessary changes, I’m sure that every cement business owner should think about increasing efficiency and their service level. These are the two main components of steady development for the cement market.
Holcim (Russia) constantly works on the reduction of its own expenses and charges, improves the quality of our products, and develops new products that are in demand in the market. Communicating with our customers and figuring out their needs, we offer a great number of different services: testing admixtures, selecting concrete receipts on the basis of our cement, timely delivery, sms-notification, etc. Our sales managers, technical, marketing and service specialists are available 24 hours a day, 7 days a week. It allows them to get real feedback. Of course, these services add to the price, but the client gets indisputable advantages.
Frankly speaking, the Russian cement market is not mature enough, and there are a number of problems to be solved. In particular, these are dumping by certain market players, counterfeit products, a type of cement usage stereotype, price-formation process, etc. It will take us another 5-10 years to build a clearly structured and civilized market. The main thing is understanding the necessity for change and taking real measures for enhancement. The future of the Russian cement market depends on each of us.