Nobody is unfamiliar with polymeric tubes, though there is some doubt as to their safety and lifespan. We are used to steel tubes, and it’s difficult to convince the common man to replace his corroded steel tubes with polymeric ones.


Polymers are everywhere
One cannot imagine modern construction and maintenance without polymer tubes. They are used for water, heat and gas supplies. For security, they are used in laying electric lines and cables, fiber-optics and other communication channels.
There is an optimal use and set of conditions for each kind of polymer. But first we should make our terms clear: ‘polymers’ is a general name. Polymeric tubes may be made of thermoplastics or thermosets. Thermoplastics include tubes made of polyethylene, polyvinylchloride, propene polymer, polyamide resin, polybutylene and some other materials. Thermosets are tubes made of polyether or epoxide, fiberglass and fiberglass-reinforced plastic. 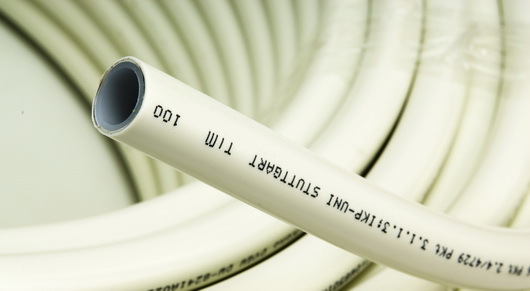 What a colored stripe says about a tube

As we can see, it’s difficult to feel confident with such a range of polymeric tubes but experts are giving us a helping hand. — Polyethylene tubes and raised temperature resistance polyethylene tubes are most widely used in water supply systems, explained Sergei Fedosov, the top marketing manager of a big polymer tube production company. And both polyethylene and polyvinylchloride tubes can be used in waste water disposal systems.
The top manager of a polymer products trading company, Marina Aleksashina, told us about the practical use of polyethylene in private house-building:
— To construct water supply and waste water disposal systems, it’s better to use black polyethylene tubes. They are delivered in coils and need fewer joints (abuts), so consequently there are fewer leaks. Their working life is up to 50 years: lay it and forget it.
Recently, combined tubes made of polyethylene and propene polymer have been widely used for laying waste water disposal systems, especially those of large diameters (up to 1200 mm). There is no better material than propene polymer for the inner waste water system in both an apartment and a cottage. Its main advantage is its high thermal resistance.
— In heat supply systems, propene polymer, metal-filled plastic (for inner distribution) and cross-linked polyethylene tubes are preferable, says Sergei Fedosov. The latter is also good for gas. As far as corrosive liquids are concerned, we must take into account the reagent resistance of a material in specific conditions. Yet I must say that both fiberglass and polyethylene items may be used.
Another important thing is the presence of a color band on the whole tube alongside the producer’s logo and designations of the tube’s parameters. The color band helps to identify the item’s range of application: for example, a blue band means that the tube is for water, a yellow one for gas.

Home or imported production?
Let’s consider the situation on the polymer tubes market. It is rather complex. To begin with, we’ll look at home producers. They are numerous and of course there are leaders with large-sized production influencing the market. In the segment of external supply lines there are five such players, and two of them are explicitly leaders: one company is situated in the Central region, the other in the Volga Federal district. Recently, Russian polymer tube production has almost fully replaced imports. But there is a big spoonful of tar in this honey barrel.
First of all, polymers will not become cheaper – this industry is very dependent on imports. The polyethylene tube deficit on the Customs Union market is about 60%. And the Russian oil, gas and polymer industries’ decline during the current crisis won’t be measurable by experts until the year’s second quarter. According to the experts, the market is now moving due to earlier signed contracts.
As Miron Gorilovsky, head of one of the biggest Russian companies in this area, thinks, it’s necessary to change the customs tariff setting rules concerning polyethylene and propene polymer to fundamentally improve the situation, to rethink import tax cancellation on base polymers, in particular.
We should keep in mind that this is a crude/raw product for subsequent reuse, Miron Gorilovsky continues. The cheaper producers get the crude product, and the more added value accumulating in Russia, the higher the opportunities for import substitution and the export potential of the industry.
For example, the customs duty for polyethylene crude product is currently 6.5%. In the current situation, such protective tariffs add to the shortage of imported quality polyethylene on the market.

Cloudy prospects
Over the past 10 years, the polymer tubes market has grown twelve-fold, mainly due to the delivery of modern kinds of polyethylene used in pressure tube production from abroad.
Before 2010, such polyethylene hadn’t been produced in Russia. When the first local production of polyethylene tubing was launched, it couldn’t supply more than one third of home producers of pressure tubes. The rest of the demand was satisfied by imported crude product. Another plant was launched recently, but it didn’t greatly change the situation: only 50% of Russian pressure tubes plants’ demands are supplied by Russian crude product.
In the producers’ opinion, the industry is not ready for full import crude product substitution. So it is too early to speak about it.

Import and export
As far as imported production is concerned, it is mainly delivered from Germany, Italy, Chekhiya [?], Poland, Finland, China and Turkey. These deliveries meet the Russian market’s demand for polymer tubes for inner lines. The more expensive product demand is from private house-builders.
External utilities are fully laid with tubes made in Russia, though there is a small percentage of Turkish and Chinese items.
The main users of Russian production have always been Kazakhstan, Uzbekistan and Ukraine, though Kazakhstan’s imports have gone down.

Under pressure
And last but not least: connecting tubes. For the information of those who like to do everything themselves: we must disappoint them. Not all tubes can be connected “on a napkin”.
In large-scale construction, polyethylene tubes are connected either with the help of electrofusion welding (in which welding sockets are used), or by butt welding. In both cases, special equipment is used. Each material has its designation and usage area, and its advantages and disadvantages.