The difficult conditions on the construction industry market compelled its players to organize the National Union of Construction Materials, Items and Structure Producers. Professionals want to put the situation in the industry right and to solve the current problems together. This initiative was supported by the state.

To remind the reader, the first statements on the necessity of the new organization creation were sounded at the end of last year. The initiative was voiced at high levels on December 19th, 2014 at a meeting of the Committee on construction materials and technologies industry of the Public Council at the Ministry of Construction, Housing and Utilities, where construction industry experts were invited.

The new structure was de jure created in some months – in April, 2015 – on the initiative of four famous companies that produce construction materials: TechnoNICOL, GC “Morton”, GC “Inteko”, and NCP “Ceramics Producers Association”. Nickolai Sobolev, the executive secretary of the committee on construction materials and technologies industry of the Public Council at the Ministry of Construction, Housing and Utilities, became Executive Director of the newly-created association, called the “National Union of Construction Materials, Items and Structure Producers”. Supreme authorities of the new organization are to be elected at the founding congress, which will take place after the National Union acquires new members. As far as we know, this will occur by the end of summer.

The creation of the new National Union became the main topic of the 1st All-Russia conference of construction materials, items and structure producers, which took place on June 4th at the hotel “Ritz-Carlton Moscow”. More than 300 specialists from all over the country took part in it. The main aims of the forum were to assess the main tendencies of the industry’s development, information interchange, to define priorities in the work of the National Union and, as a result, to elaborate an integrated strategy of the construction industry’s efficient development.

According to the opinion of Mikhail Menn, Minister of Construction, Housing and Utilities of the RF, the creation of the professional union is aimed at the authorities’ support for construction materials producers in the resolution of different industry problems.

“It is very important; we need a partner for a dialogue,” remarked the Minister. “We already have the Association of constructors, and the Association of designers and surveyors. Now we have an association which will help to understand the position of the whole industry, the whole professional community and not separate companies.”

In perfect step with the authorities

The evidence of the authorities and big business being interested in cooperation with construction materials producers lies in the fact that the heads of Ministry of Construction, Housing and Utilities and of the Ministry of Industry and Trade, Mikhail Menn and Denis Manturov, as well as Anatoly Chubais, Chairman of the Board of “MC “ROSNANO”Ltd., became co-chairs of the supervisory council of the “National Union of Construction Materials, Items and Structure Producers.”

According to Denis Manturov, his department is elaborating the industry development strategy to work out measures of support for construction materials producers.
“We’ll form separate subprograms of construction materials industry development in the framework of the state program,” explained the minister.
Also according to him, the Ministry will include the industry of construction materials in subsidies of inter-branch support concerning credit interest rate compensation for current assets in the framework of anti-crisis plan.
“Now constructors can use the state support resources in full volume, and the Government measures can crucially alter the situation in the industry,” Mikhail Menn claims.
“A revolutionary resolution on the approval of state specification of technical regulating and price forming in construction was adopted at the Government meeting,” he said. “Currently the preparation of documents for this state specification is being completed in the Ministry of Construction, Housing and Utilities. We are going to announce a call for specialists in construction materials, vehicles and mechanism services tariffs to create a new foundation. It will help to overcome the crisis phenomena,” resumed the minister.

Until now, all bases in price-formation were made on the declarative principle. Now the approach has changed, and for the first time state money has been allotted: 5.5 bln rubles will be allocated for technical regulation and price-formation for three years. In the minister’s opinion, this money will give the opportunity to form an integrated base of standards and regulations, prices on construction materials, vehicles and mechanisms services in the course of three years, and it will be possible to monitor the prices for all the items constantly. 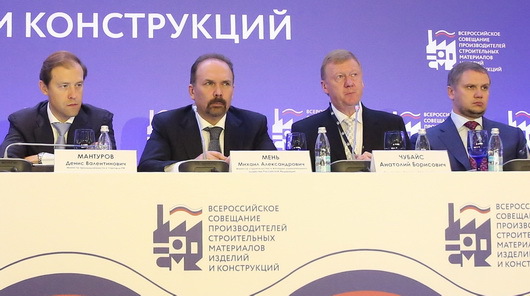 We want to believe

The Ministries heads’ broad statements, heard at the conference, give some hope to the producers of construction materials as far as the industry prospects are concerned. They are flattered that state agents of the first rank, on whom their business depends, are ready for cooperation and want to give an ear to them. However, the majority of the forum participants have a wait-and-see attitude.

It is not only connected with the forming of yet another structure, as they are already numerous in the industry, from the Russian Constructors Union to non-diversified producers’ associations. There does not seem to be any visible results from all these associations and unions — both for common people, and professionals of the industry. As a rule, the extent of their activity is the collection of money, and sometimes big money, and beyond that, speaking at conferences taking place in expensive hotels.

For the forum participants even more bewilderment was caused by the division of powers between the Ministry of Construction, Housing and Utilities and the Ministry of Industry and Trade concerning construction materials. Now the department headed by Denis Manturov is responsible for the state policy concerning construction materials, and also for support and up-grading of the industry enterprises. Everybody knows how the Ministry manages with new tasks. One need only remember the upgrading of civil aviation industry. And the work of the ministry in the implementation of the pharmaceutical industry development program in imported drugs replacement was sharply criticized by the Government. In general, before starting the up-grading of an industry it is necessary to know it, not simply by reading the headlines of governmental resolutions and state programs. But as one understands, these people severely lack knowledge of the industry’s problems…
Incidentally, this has been confirmed by the participants’ comments on the sidelines and by the answers to our magazine’s questions. This was the case even though our interviewees tried to avoid sharp criticism.

“This is the organization to both consolidate producers and address the Government with proposals; it is the right decision”, said Igor Demin, Head of Department in Sverdlovsk region’s Ministry of Construction and infrastructure development. “And construction professionals should take decisions in the Ministries, but we are still far from seeing that.” 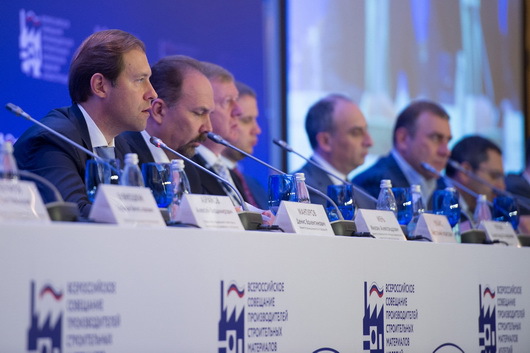 A famous specialist, MSCU deputy rector prof. Andrei Pustovgar, also shared his point of view:
“I do not see any results from acting construction associations,” he said bluntly. “It doesn’t add to progress in construction. What happens next will be shown by real actions. If the new association manages to become a consolidating factor and helps the work of regulating ministries, which are to open new markets, and if it stimulates new spheres of construction materials use, then it will be good.”

“We were among those who initiated the creation of this union and will enter it as an association,” said Maxim Kravtsov, President of the Russian Association for quality heat insulating materials producers. “For us it’s the opportunity to stay relevant and understand the way the situation develops. For now this “child” has all the chances, and we want to take part in the process. Later we’ll see, if it is useful for the industry. “

Another participant of the conference and a famous expert in this field, Alexander Fadeev, is rather pessimistic:

“I think that the new national union of construction materials producers is a “stillborn child”, which won’t exist for long, because there are a great number of different unions: the Russian Constructors’ Union, Russian Constructors Association, but they do little to lobby the industry interests at the national level. Besides, there are lots of associations uniting producers of separate kinds of materials: ceramics, heat insulation, dry building mixes or paint and coatings.”

“They also should influence governmental decisions. If they do not enter the new union, this will appear to be a kind of bureaucratic game and nothing more,” Fadeev is sure. 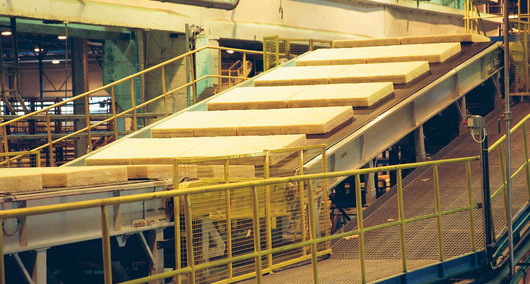 In the opinion of Sergei Kolesnikov, President of “TechnoNICOL”, the main aim of the Association is to provide for dynamic and innovational development of the construction materials industry.

“The construction industry differs from other branches with its focus on innovation, its ability to work with partners and high export potential,” Sergei Kolesnikov said. “We hope that the activity of the new association will help bring Russian construction regulations and standards in accordance with European ones, which will provide for the Russian construction materials export development and the use of new energy-efficient technologies in building construction.”

The nearest future will show if the new structure copes with these uneasy tasks. Let’s hope for the best.

We’ll continue to inform our readers about the work of the new construction union.

Utility tariffs: Moscow is not Yerevan, but still…