Ceramic brick sales have been growing recently and limestone brick sales are noticeably declining (although more than half of all houses in Russia are built with them). What’s the reason for this, our correspondent asks.


Is limestone brick a thing of the past?

The interest in ceramic bricks is not temporary
Russia followed Europe in using ceramic bricks. Buildings constructed with it look smart and presentable.
— The ceramic brick is thousands of years old! insists Albert Popov, the Executive Director of the Ceramic Materials Producers Association. The new flurry of interest in this time-tested construction material is no coincidence. It has numerous advantages: it is strong and long-lasting, it is fireproof and energy-efficient, and it has null [IS THIS THE RIGHT WORD?] humidity (absorbs slowly and dries quickly).

Limestone brick is quite another thing.
— Limestone brick itself is a good material, but in a humid environment it needs additional water isolation. Ceramic brick can be used in places with a lot of vapor: the material’s vapor permeability index is optimal, and the color doesn’t bleach with time.

160 mln bricks is not a problem!
The production of ceramic bricks is growing every year. A medium-sized plant with 300-400 workers can produce 30mln ceramic bricks a year, and there are more powerful plants than that. For example, the plant in the Tver region, with 500 workers, produces 160 mln bricks a year. The Moscow region plants produce about 1 bln bricks a year. Ceramic brick plants are operating in Ekaterinburg, Chelyabinsk, Omsk, Tyumen, and a big enterprise is being designed in Novoaltaisk. These plants put out a wide variety of product: from lining and course brick to clinker brick and large-sized wall materials.

To the market… of demolished buildings!
As Albert Popov told us, a new and very interesting market has appeared recently: that of demolished buildings. What’s the situation? An old house is destroyed and its bricks are sold to architects and designers. A new building made of such bricks looks picturesque and keeps all its physical qualities. Such authentic brickwork is often used in elite lofts: whole floors are decorated with it.
- This proves, says Albert Popov, that our material is very long-lasting and reliable.

Now we needn’t go abroad for hand-formed brick
Another kind of ceramic production has started recently in the product range of ceramic brick plants: large-sized ceramic blocks.
— One large-sized ceramic block can replace 10—15 course bricks, — explains Albert Popov. The block weighs a little over 20 kg (it has multiple cavities inside, and even a medium-sized man can lift it). Another newly-designed product is hand-formed brick. It wasn’t previously in great demand but now Russian producers have acquired the technology of hand-formed brick coloring. In the framework of import substitution, program brick producers are looking for local chemical enterprises capable of importing PWM substitution.
So, in Albert Popov’s opinion, the popularity of ceramic brick is quite well deserved. 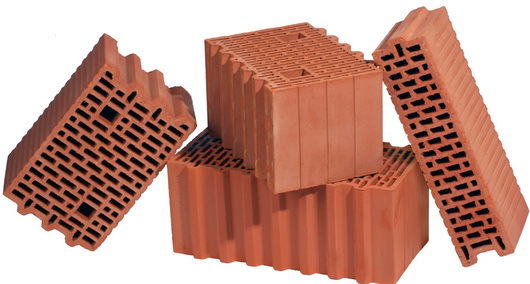 How can we (and should we) draw the customers’ interest to limestone brick?
— We must! a representative of one of the biggest Russian limestone brick producers assured us. Interest has risen abroad lately. For example, in Germany constructors happily use limestone brick. It doesn’t need any insulation and it has good supporting cantilevering: it supports hinged ventilated facades, doors, floor-to-ceiling windows, air conditioning units, wall dowels etc. Ceramic brick is more fragile in this regard.