For the first time, 8 works from Russia have made the shortlist of the prestigious architectural festival WAF, which is the Oscars of architecture.


The international architectural festival has been held since 2008, and this year it will be held for the eighth time. WAF is called the “architectural Oscars” and there is good reason for that. The most famous architects and architectural bureaus in the world have been among the nominees and winners of the festival.

Eight Russian finalists
The projects having previously received the architectural Oscar are truly unique: for example, the Opera House in Oslo, built in the sea and resembling a big ocean liner; the Tusen restaurant in Sweden, constructed from birch bark; or the MAXXI Arts Museum in Rome, created from a brewery. 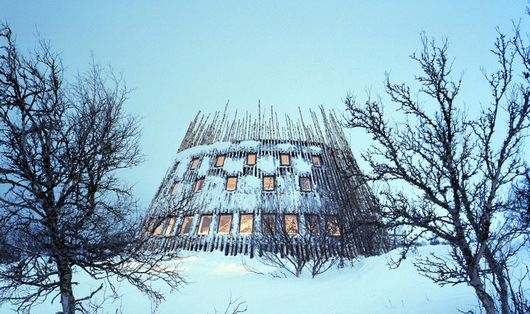 Until recently the festival has taken place in Barcelona, but now it has moved to Singapore. It is in Singapore that the results of the definitive architectural competition will be announced.
700 architects from 47 countries have staked a claim in the competition. The shortlisted works were presented in London in June. This year, 8 projects from Russia have made the final, four already constructed, two at the design stage and two urban development concepts for public space planning.
Besides the famous Sochi ‘Fisht’ stadium, the shortlist includes the General Staff building at the Hermitage (Saint-Petersburg), the Dance Academy of Boris Eifman (Saint-Petersburg), the reconstruction project of Kaliningrad’s historic center, and four projects in Moscow: the trading center on the Borovskoye Highway, the concept of Revolution Square, the Stanislavsky Electric Theatre, and the design of the Modern Art Museum at the Udarnik cinema.

The Fisht stadium in Sochi - the ‘Sports’ nomination
This object was one of the first to get into the final of the architectural Oscars. It is where the opening and closing ceremonies of the Winter Olympics took place. 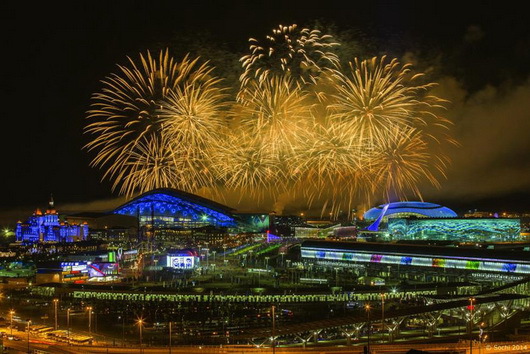 After the Olympic Games, the stadium was closed for reconstruction – it is to be prepared for the 2018 Football World Championship. The cost of the reconstruction totaled 3 bln rubles (the construction expenditures was 20 bln rubles).
It is interesting that the stadium was originally designed as unroofed. It was ‘covered’ only because of the requirements of the technology for the opening and closing ceremonies. For the WC, it will be ‘uncovered’ again. 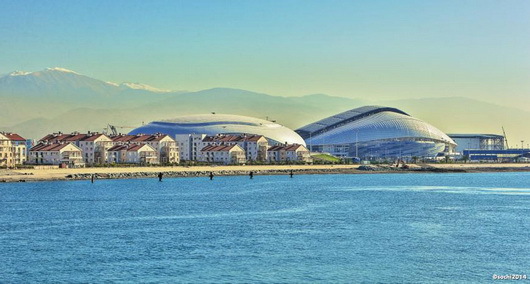 The General Staff building at the Hermitage (Saint-Petersburg), - the ‘Culture’ nomination
This reconstruction was chosen by the jury unanimously. The General Staff building was in the process of reconstructed for 5 years and a gigantic volume of work has been carried out. The architectural masterpiece was carried on concrete piles, Rossi’s historic street-lamps were restored, a glass roof appeared over the inner yards, and modern engineering communications were laid. 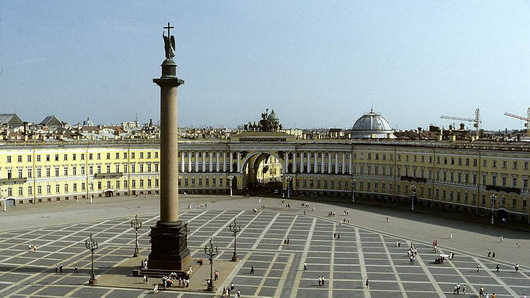 The cost of the project was 6.2 bln rubles. In 2014 the General Staff was opened to visitors. 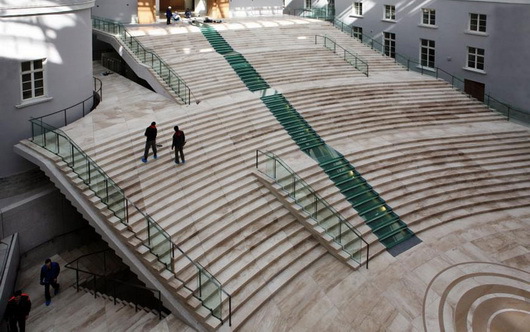 The Museum of Modern Arts (Moscow) - the ‘Best project’ nomination The Turkish architectural bureau Emre Arolat Architects was contracted to work on the reconstruction project of Moscow’s oldest cinema.
According to the authors’ concept, the legendary “Udarnik” cinema in Bolotnaya square is to be reconstructed as the Museum of Modern Russian Art. The project is based on a constructivist concept: strong rectangular forms under the ceiling and clear geometry in the halls and exhibition spaces. Looking at the project, one is reminded of the works of the Russian avant-garde poineers Kazimir Malevich and Vasiliy Kandinsky. 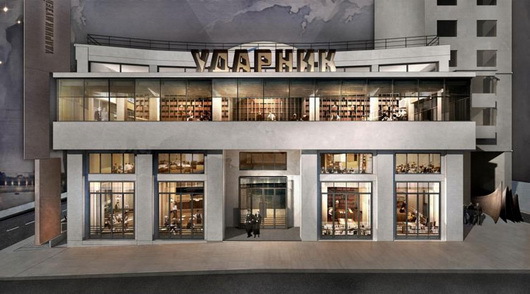 But the concept remained a concept: the real reconstruction of ‘Udarnik’ will be carried out by the Belgian company, Robbrecht en Daem Architecten (to their own design), which has won the tender for the reconstruction. The Turkish concept has every chance of winning a prize at the festival. 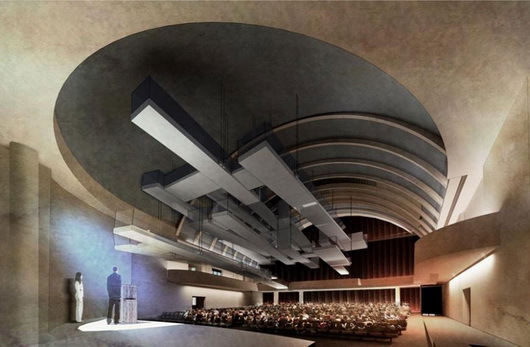 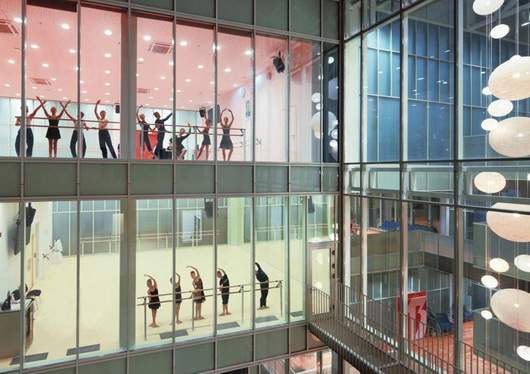 The new building is an educational complex that includes everything required for ballet exercises. There are 14 rehearsal halls, a swimming pool, a medical care center, a training gym, a hostel for students, and classes for general studies.
The building is multi-level and there are a lot of translucent structures. From each of the terraces one may see the other terrace levels. This gives it the feeling of a vast dance hall where everybody is busy.
The author of the design is the architectural workshop ‘Studio 44’ (Saint Petersburg). The cost of the project is 1.4 bln rubles. 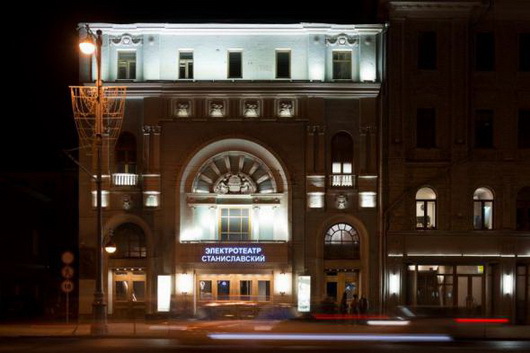 The new theatre is one of Moscow’s most advanced cultural sites, with a vast auditorium that can be transformed into public spaces of different configurations, 6 rehearsal halls, acoustic panels, a lovers’ staircase, etc.
— We had to deal with an architectural monument, and as with any other architectural monument, there were conservation issues, says Oleg Shapiro, one of the project’s authors. – For example, the historic staircases, the entrance’s doors, the ceilings and the balcony in the auditorium… all these have been preserved. 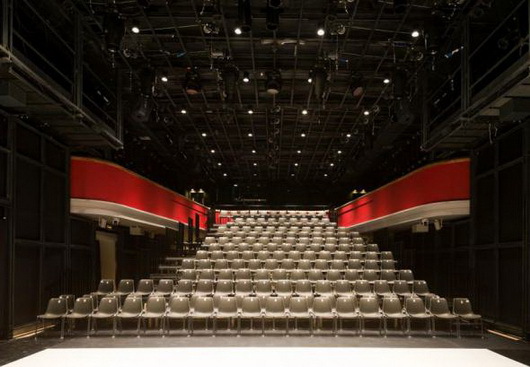 The concept came from the famous Moscow architectural bureau Wowhaus, under director Mikhail Kozlov. It is interesting that the reconstruction was carried out for an acceptable amount of money and it may be considered a shining example of the updating of cultural infrastructure. The cost of the reconstruction was “only” 800m rubles.

The reconstruction project of Kaliningrad’s historic center – the ‘Public spaces’ nomination
To remind you, Kaliningrad, formerly K?nigsberg, was completely destroyed as the result of British bombing attacks in 1944. The center of the city had been a sandlot instead of a built-up urban area. Some years ago the city authorities announced their decision to restore the city. An architectural competition was initiated for a new concept of the “heart of the city”. 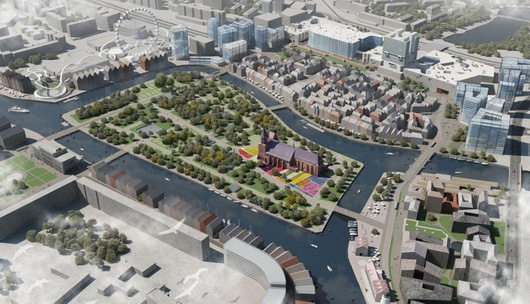 Visualizing the project as created by the winner of the competition and the nominee for the architectural Oscar, the Saint Petersburg architectural bureau Studio 44 under Nikita Yavein, we see an enchanting picture of a retro-town with a cosy atmosphere, saturated with retro spaces, small cafes and shops.
The concept is the reframing of old German architecture (pointed roofs, specific window forms, brickwork) with new construction trends.
— This will be a very thick, dense image of a retro-town, of a museum town, says Nikita Yavein. 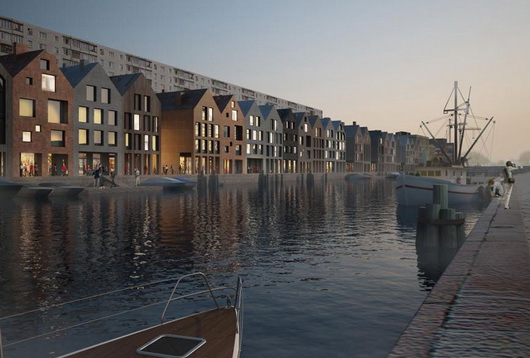 Revolution Square (Moscow) – the ‘Culture projects’ nomination
The project of Revolution Square’s reconstruction is also from the authoritative Moscow bureau Wowhaus, which is famous for its Strelka Institute interiors, objects in Gorky Park, the skating rink in Sokolniki, Museon Park on the Krymskaya Embankment and the aforementioned Stanislavsky Electric Theatre. The bureau suggested turning the square in the center of the capital, beside Red Square and the Kremlin, into a public space for pedestrians. The new concept integrates several separate pedestrian areas into one big space for promenades. 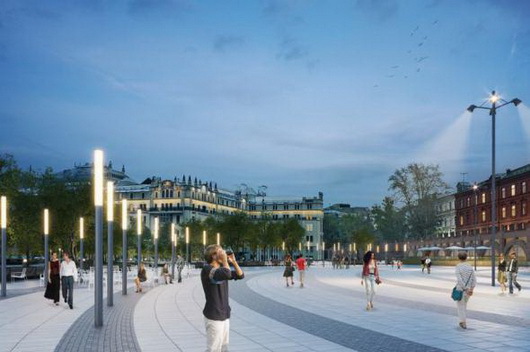 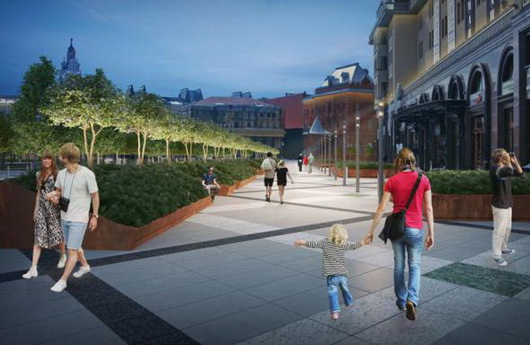 The avant-garde rounded lines of the trading center evoke the creations of the famous Zaha Hadid. Unusual colors and ornamentation are used in the decoration of the center. 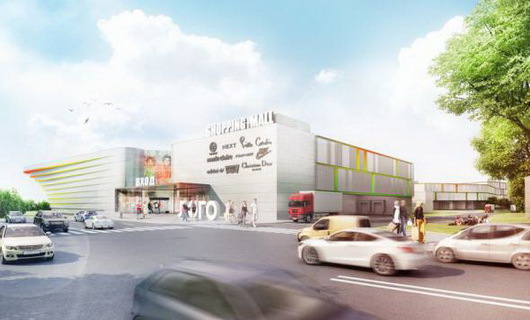