A real person can thrive only in top-rate architecture.

— Mr. Shumakov, hardly anyone can argue with the idea that architecture influences us greatly. And still… 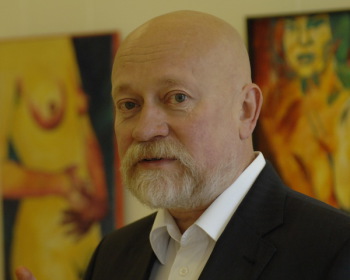 — There are such naïve ideas – that a person living a full life may live properly only in a good quality architectural environment.  That is, standard blocks, commie blocks, tents and vendor kiosks are not fit for human habitation at all. If you are born in and live in an environment of dirty streets, dying trees, and overflowing litter-bins, you yourself become “littered” with bad sensibilities. And all of your thoughts are narrowed down to what and where to eat, to drink, to relax… A person becomes limited. Of course there are exceptions, but they are rare. I think there is a lot of truth in these naïve and schematic notions. Anyway, a true understanding of the role of architecture in our life is close to this – it really has a huge influence.

Another trade centre instead of the Aviation and Cosmonautics Museum.

— Mr. Shumakov, there is an opinion that architecture is even able to manage traffic jams. When an architect designs a building in the centre of a traffic-choked town, he creates or strengthens the intensity of traffic in one particular place. And the reverse is when he takes this into account, choses an optimal area somewhere in the outskirts and thus eases congestion in the district. Do you agree?

— In general, architecture is the art of comfortable space organization. And traffic problems are a part of urban development. So I agree that traffic jams are also an architectural problem. If everything is designed well at the general lay-out stage, there won’t be any problems.

It is quite thoughtless to locate malls in the city center and even inside the Third Ring Road.   Recently a 400,000 square meter trade centre was built in Khodynka. What absurdity!  It is in the very center of the city, intense traffic, crowds of people...  To my mind it is unreasonable.

By the way, this commercial store appeared in Khodynka in place of the previously planned Museum of Aviation and Cosmonautics. The capital needs such a museum, but there is no money. A private investor will never invest in such a thing. That’s why planes were destroyed, and instead of museums we build gigantic stores with quick stock turnover.  And then we put the Museum of Modern Arts somewhere in the backyard, where goods are loaded and unloaded. This is a symbol of the modern state of Russian culture.

In Rome the whole Old City is a monument.

— From your point of view, what percent of historic buildings must be preserved in a city? It is clear that if all buildings are preserved, the city will not develop. It is a living organism and needs to change.

—Different models must be considered, maybe even some divine decree. For example, all of the city of Rome is an architectural monument: park art, Caracalla Thermae, Diocletian’s stadium and ordinary residential buildings. In Moscow, I’m sad to say, more and more historic buildings are being demolished.

Is there quality architecture in Moscow?

— Not so long ago, at one of the town-planning forums, architectural critic Grigory Revzin announced that there is no architecture in Moscow. In Luzhkov’s time there was, bad though it may have been (at least the «towers», for which he was constantly criticized). And now there are no objects even worthy of being criticized. Do you agree?

— Now we are in a state of sluggish continuous crisis. Business is not developing. There are no new investors, and the old ones have built so much that they don’t want anything more. So I agree with Revzin: an architect is a dependent person. He is hired. And if there is nobody to hire him, nothing will appear. Before an architect comes to a site, a number of serious decisions must be taken, starting from the authorities’ political decision and continuing up to the definition of the construction site location, the search for investors etc.  And then somebody will appear who will order a talented architect to create a project. And we have problems in this area, as I have already mentioned. We are all waiting for the implementation of big tenders that have already taken place: Zaryadie, the Museum of Modern Arts, the Polytechnic Museum. And we are hoping for good results.

— Perhaps the changes in the city’s image should be started from large-scale construction? Are there any new tendencies in this area in Moscow and the Moscow region? And do you like them?

— Large-scale construction appeared after Khrushchev’s resolution on the struggle against architectural aesthetic frills. Little has changed since then, and 60% of buildings are still constructed according to a generic design.

But the situation is changing. Moscow’s chief architect Sergei Kuznetsov set us a task to reorganize large-scale construction. Some rules and regulations defining pattern architecture were adopted.  Integrated house-building factories were also given tasks concerning design.

Despite the crisis, it is possible to find compromise. Nonstandard solutions in large-scale construction involve façade configurations, interesting variants of dumb gable façade usage, different parking zones, multilevel buildings, the use of ground floors for public purposes etc. If such notions are followed, we’ll be able to speak of quality large-scale housing construction.

Real architectural pearls can be found in industrial areas.

— The renovation of the capital’s industrial areas is a hot topic nowadays. How should these areas be rebuilt?

— First of all, one shouldn’t forget that this is a vast area with its infrastructure, communications and its own life. It is impossible to say that here a park should be placed and there a block of flats or a public center should be built. Each industrial area should be considered individually.  There cannot be unified solutions. The optimal one must be chosen.  By the way, we can often find very interesting architecture from some past era. It is a real pleasure to work with architectural monuments. Long-standing buildings may be transformed into lofts, exhibition halls, studios etc.

To put it in other words, each industrial area must be considered and treated delicately without razing it to the ground.