The final solution about the construction of the Parliament center in Mnevniki is being delayed. Strange as it may seem, architects are to blame for that.


The parliament center in Mnevniki where the studies of senators according to one of the projects are about 100 square meters, and the Federation Council Speaker’s study is about up to 500 “squares,” puzzled many people.

There were also a lot of discussions about project decisions of the center, presented at the competition declared by State Duma. Some people did not like the too-modernistic cubes of glass and concrete. Others did not appreciate excessive classicism. 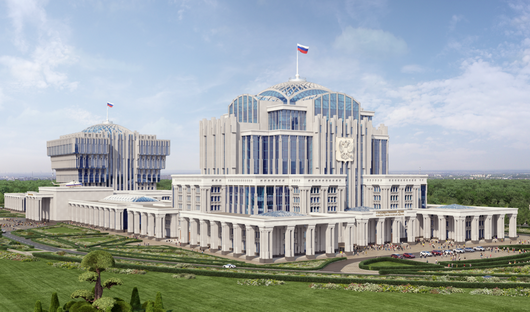 Why the chosen projects remind people of the Bolshoi and Capitol
Eleven architectural bureaus took part in the competition, declared by a special commission. Among them are such famous offices as Yury Grygorian’s “Meganom”, Vladimir Plotkin’s Creative productive association “Rezerv”, Sergei Choban’s Speech and Mikhail Philippov’s workshop.
Three projects became finalists: CJSC “Stroygazcomplect” headed by architect Lanfranko Chirillo, “Evgeniy Gerasimov and partners” workshop and JSC “Mosproject” headed by Mikhail Posokhin.
The models presentation took place in the central hall of the Federation Council. The most famous finalist of the competition was Mikhail Posokhin, Head of “Mosproject-2” and Head of National Association of Surveyors and Designers (NOPRIZ). He is a hereditary architect and has built dozens of objects in Moscow: the trading center under Manezhnaya square, Novinsky passage, trading center “Druzhba,” and a sky-scraper in Ruzheiny side-street. His institute worked at the reconstruction of the State Duma and supervised the construction of Christ the Saviour Cathedral.
But the deputies liked Lanfranko Chirillo’s project more. It’s not worth guessing why: the studies for the leaders of both chambers remind one more of football fields: from 100 to almost 500 square meters. While at the moment senators’ studies in the building of the upper chamber in Bolshaya Dmitrovka are not more than 10 square meters.
In the result common sense prevailed, and Evgeniy Gerassimov got 34%, Mikhail Posokhin – 28% and Lanfranco Chirillo – 25.9%.
To say earnestly, all the three projects are made in a classically pompous if not to say imperial style. High-tech variants from glass and concrete were declined by the commission at once. 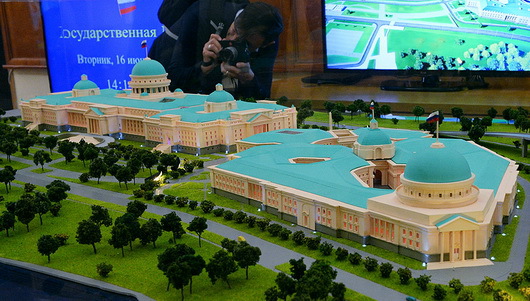 Who will get the old buildings of State Duma
It was remarked that this time only Russian companies took part in the competition. Even Lanfranco Chirillo may be considered domestic architect; not so long ago he received Russian citizenship.
“Formerly foreign specialists were often attracted to the construction and the designing of large objects, now we focus on Russian participants,”Valery Vassiliev, commission member from Federation Council, told “Izvestia.” “We have rich architectural traditions, and there are companies able to construct modern and comfortable buildings and infrastructure. Of course, everybody was interested to know which company will get such large-scale construction.”
The professional community actively discussed the rumors that the Parliament center construction will be assigned to Mikhail Gutseriev’s “INTECO.” There were versions that the businessman will fully finance and erect the buildings ensemble for the legislators, and in turn he will get the current buildings of the State Duma and Federation Council in the center of Moscow (the area of more than 100,000 square meters: two buildings of State Duma and five buildings of Federation Council in Bolshaya Dmitrovka, Novy Arbat and Vosdvizhenka). 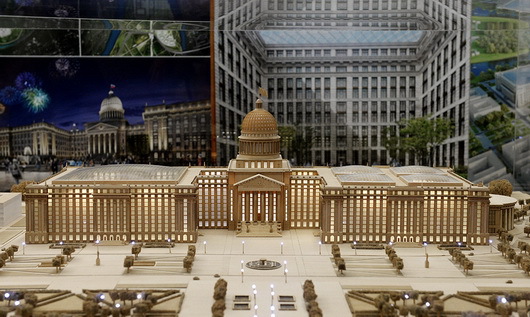 According to the commission, minuses outweighed pluses
…But recently the topic of the new parliament center took a new swing, meaning, that the constructors are likely to have to wait.
Deputy Chairman of the competition commission Elena Panina announced the unanimous decision of the commission to hold another competition. Not for the reason that the architectural decision did not satisfy the commission: it turned out that deputy corps’ needs were not fully taken into account.
In the course of the discussion about the three projects-finalists, Elena Panina said, “many drawbacks concerning not so much architecture but functionality for the work of the two chambers appeared…It is necessary to have halls for joint hearings, there must be integrated infrastructure, joint use territory… That’s why the decision is taken to prepare another technical assignment with detailed parameters and to hold another competition.”
Federation Council speaker Valentina Matvienko also criticized the projects. She said that all the three projects of the future Parliament center “need serous modifying”. “All the three projects are wonderful, but none of them will do,”she said suggesting that it would be a good idea to create a working group for modifying the design solution.

The old participants and newcomers will compete on equal terms
It was supposed at first that the new the winner of the competition would be announced in July. At least the Head of the Commission on the Parliament center construction Vladimir Resin spoke about it. But now the final choice may run into overtime.
However, this unexpected turn has its positive features. For example, new companies may try out and take part in the competition. Both architectural bureaus having presented their projects and newcomers will be considered on equal terms.
And the main thing is that the deputies still have time to think over if they really need such a pompous and super expensive construction.