Sergei Levkin, the Head of the Department of City-Building Policy, Development and Reconstruction of Moscow, talked to our magazine about how the old housing stock in Moscow is being renovated.


-Mr. Levkin, how large is the “park” of Moscow five-storey blocks of flats?
— I think we must be grateful to Moscow’s Khrushchev-era housing because in its time it helped to solve the problem of providing Moscow’s citizens with modest but rather comfortable housing. But time passes, and now these houses are obsolete and don’t meet the requirements applicable to modern housing.

-How many Khrushchev-era houses are there in Moscow?
The program of the demolition of the first-period industrial house-building five-storey blocks of flats has been ongoing in Moscow for several years. According to this, the demolition of 1772 houses (6339 thousand square meters) was planned. By the middle of March, 1519 buildings (5600 thousand sq m) had been demolished. The demolition of 897 houses was financed from the city budget, and 622 houses with investors’ funds. At this point the program of complex reconstruction of five-storey house districts is 88% finished.
Five-storey houses have been knocked down in the Central and Southern districts and in Zelenograd. A five-storey house, having been knocked down, is replaced by modern blocks of apartments, garages, and social objects (schools, nursery schools, hospitals), creating an improved living environment. 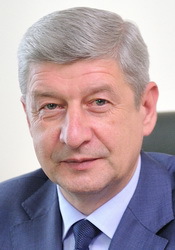 — What is the state of the rest of the five-storey houses? In what conditions are people living there?
You know, at the end of 1990s, under instructions from the Moscow government, the five-storey buildings from the first period of industrial housing construction were inspected. At that time there were 10 000 five-storey buildings (25.3 mln sq m). The results of the inspection were disappointing. The most worn out, both physically and ‘morally’, were the houses of the ?-7, II-32, II-35, 1605-?? and 1?G-300 series.
One cannot say that those houses were in an advanced state of disrepair but they still had serious construction and design drawbacks. In particular, ceiling plates were sagging, there was partial peeling of the outer concrete layer in sandwich panels, and there was an absence of reliable anti-corrosion protection. These five-storey blocks of flats were included in the Resolution of the Moscow Government, which designated them as subject to demolition.

— Are there any norms for demolition: for a month, for a year?
— The key document here is Moscow Government Resolution ?608. There is also a combined schedule of rehousing, the demolition of old houses and the construction of new ones, as adopted by the Deputy Mayor of Moscow for urban development and construction, Marat Husnullin. Rehousing conditions and a citizens' rights priority list have been established by the Law of the City of Moscow, “On Providing Citizens’ Housing Rights while Re-Housing in the City of Moscow”.
The inhabitants of the five-storey houses being demolished are provided with apartments as good as theirs and if possible in the same district. If a person wants to get a flat in some other district, he must inform the authorities about it in writing.

— Is it possible to renovate or reconstruct Khrushchev-era houses: to replan the apartment or to build up a usable roof floor etc.?
— The reconstruction of the house series that are to be demolished is not an option because it is neither technically nor economically feasible.
A house in Mishin Street has been renovated; others are waiting their turn.
— Another thing is the series that aren’t to be demolished. One may look at the pilot project in Mishin Street (Northern district). This example shows that one of the improvements in living conditions is a reconstruction with a built-up usable roof floor. The peculiarity of the project is its realization at the expense of the householders and without re-housing.
The house in Mishin Street is a four-storey building built in 1956. It had the following features: brick walls, reinforced concrete floors and a pitched roof with a rainwater pipe. The main load-bearing structures were in a good state and could serve for a long time. But the house itself was out-of-date: it didn’t meet modern requirements of energy efficiency, the engineering systems and equipment were worn out and there were no lifts or other modern conveniences.
Not all houses can be built upon. There are a number of restrictions. First of all, the house must be of a series that is not to be demolished and must have certain necessary features. The full list of house series for reconstruction is given in “The guidance note” on the website of the Department of Urban Planning of the City of Moscow. Besides, the building must not be located in a special protection zone or near a road network. And the main thing necessary for the beginning of reconstruction is the consent of the majority of apartment owners (2/3 of the votes). Such a decision must be taken at a general meeting of the owners.

Those who invested in the reconstruction will get square meters at cost price.
— The prospect of living on a construction site for some time is not very attractive. However, despite temporary hardships, such projects have a lot of positive sides, economic considerations among them. Apartment owners taking part in the reconstruction financing will get square meters at cost price. And those owners who don’t want to invest in the project will get an increase in existing living space at the cost of jointwork, as well as the elevator, the individual heat point, the staircase lounges, the capitally reconstructed existing part of the building and the improvement of the surroundings.
It is important that people who live in the house do not leave the district they are accustomed to, and the nursery schools, medical offices, schools and other district infrastructure objects that they know. The project in Mishin Street, 32, is to be finished this spring.
The city authorities are ready to organize methodical help for initiative-taking groups willing to follow this example. And they are proceeding in this way now. The specialists from the Department are meeting with the citizens, telling them about reconstruction methods, procedural and institutional models and financial schemes for the implementation of such projects.

— The task is known to be aimed at getting rid of uncomfortable housing stock in the capital. When is it planned to be completed?
— After the demolition of the first-period industrial house-building five-storey blocks of flats, designated in Resolution 608 of the Moscow Government, the second stage of the housing stock renovation is outlined in the framework of the state-run program, “Housing in 2014 - 2018”. The second stage includes five-storey houses of the series that aren’t to be demolished.
We should remember that renovation means not only demolition but reconstruction and major repairs. Territory development and improvement projects will be realized from the funds of investors.

Will the new draft law on construction contracts do away with price falls at tender?