How to create a congenial investment climate in the regions? This was the main point of discussion at the 4th Russian Investment Forum that took place in Gostinnyi Dvor in Moscow. 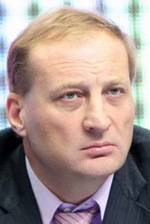 According to Leonid Kazinets, we sincerely believe that the state owes us. And the state generously supports such paternalistic behavioral patterns.

— But the time has come to say good bye to this misleading behaviour, says the Head of the National Association of Builders and of the “Berkley” Corporation. In his opinion, one should stop berating an order which one has done nothing to correct.

What is most attractive for investors?

—                For a number of years, investment attractiveness ratings of Russian regions and towns have been drawn up. The Deputy Chairman of the State Duma’s Housing and Community Amenities Committee and National Agency for Low-Rise and Cottage Construction President, Elena Nickolaeva, gave us some of the latest assessments. From the point of view of construction investments, the most attractive are the Kaluga, Ulianovsk, Kostroma, and Krasnodar regions, and Tatarstan. Investors are most welcome there.

As far as infrastructure investments are concerned, the leading regions are: the Rostov, Krasnoyarsk, Kaluga, Sverdlovsk, and Leningrad regions, and Tatarstan, and St. Petersburg and Moscow.

These regions have shot ahead due to the authorities’ ability to work efficiently with investors.  In some regions, such work is carried out in “manual mode”: direct consultations, negotiations, business trips and forums.

Everything that reaps results is good, says Elena Nickolaeva.

The Ministry of Construction in its turn tends to monitor and control the regions’ investment attractiveness. Department officers will regularly visit regional web-sites and check if there is information useful to investors, which lots are for construction, which departments should be addressed for consultations, etc. A coordination HQ set up for the purpose will carry out so-called ‘test purchases’ in order to understand if the mechanisms created in the region are convenient for investors. 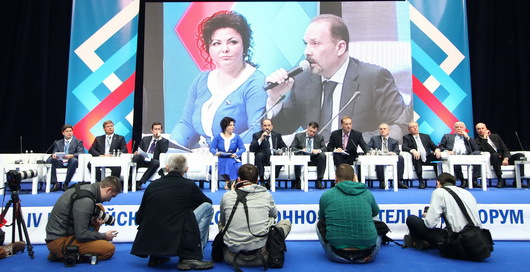 Recently the Ministry of Construction has adopted an exhaustive list of procedures in the field of housing construction.  The list prohibits local authorities from doing anything that is not on the list. The Ministry of Construction has carried out large-scale work, having made the list as good as possible and having excluded procedures which aggravate the developers’ work and create additional administrative barriers.

Another important process is the digitization of construction state services. When a person (a functionary) is excluded from the process, the probability of unfair personal assessments and decisions decreases greatly.

State expertise will also be digitized. This is also convenient for investors. Of course, this format significantly raises the responsibilities of the experts. By the way, there is a draft law increasing the demands of the experts’ competence assessment (qualification).  According to this draft, the penalty for giving out positive but fake assessments has increased — including the possibility of the removal of the qualification certificate and the removal of the right to re-qualify for three years. So, there must be no deception.

Your utility services may be bought out

Investors and developers could really be helped by such organization as the Agency for Financing of Housing Construction and its program for buying out utility services from a developer, which is focused on reducing the final housing cost for some categories of citizens.

Utility services are to be bought out at the price of 4,000 roubles for 1 square meter. What does a developer have to do to get into the program? First of all, one should ensure that the project corresponds with definite requirements. Entering the program, a developer contracts to sell a definite number of square meters to certain categories of citizens, as specified by state rules and regulations (e.g. public sector workers etc.).

The Federation subjects will be responsible for the selection of projects.

However, the Agency for Financing of Housing Construction is not the only organisation supporting construction projects. Significant support through banks has been realized via the framework of the “Stimulus” program.  According to the program, the bank receives funds for giving credit to the developer.

As Leonid Kazinets told us, if a developer takes part in the program, it’s quite realistic to get credit at 11-12% a year from the top thirty banks. It is a tempting offer now the interest rates of Russian banks have risen.

The PPP - public and private partnership - has been discussed for some years already. It seems to be a very convenient tool for implementing large-scale projects which cannot be realized by a region or business acting alone. But…

— It was a great surprise to me, confessed Elena Nickolaeva, when the Ministry of Economic Development and Trade announced that they were against including the Law on PPP into the housing construction section.

However. President Putin has mentioned several times that it is necessary to develop the mechanism. The Minister of Construction, Housing and Utilities, Mikhail Menn, supports this idea. Isn’t such weighty support enough? 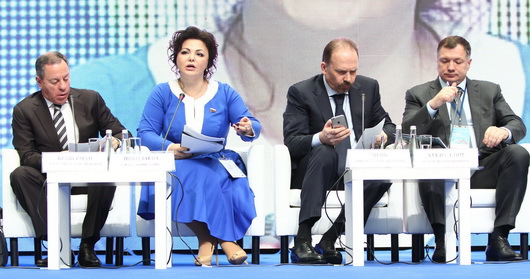 Representatives from the Russian regions took the floor at the forum. For example, Kaluga’s representative (the city and the region are the leaders in all investment ratings) said that technologies were designed both for foreign and home investors long ago. 150 large-scale projects have been implemented. Some industrial parks have appeared, and there is even an economic zone.  Last year, 800,000 square meters of housing were put into operation. All the necessary information about vacant grounds for industrial construction is available on the city’s web-site.   However, Kaluga was criticized for not having information online about the city’s ability to present territories for housing construction. The Khanty-Mansi region’s representative remarked that Siberian builders are looking forward to attractive tools and mechanisms to help them in current uneasy circumstances. He meant, in particular, a mortgage loan state support program, which is known to have been launched already.

The forum participant from Ryazan spoke about the agreement to create a developers’ blind pool in the region for rendering support to its members in difficult times. Moreover, he suggested decreasing the number of public hearings on the territories’ integrated development.  He suggested uniting all of the numerous procedures into one.

In general, the 4th Russian Investment Forum showcased the mutual interests of the state and investors in working out convenient and efficient mechanisms for construction investment.