Spring is the time for beginning road construction works. It’s also the time for the annual board meeting of the heads of the trade departments and institutions, organized by the Federal Road Agency (FRA), “Rosavtodor”, to finalize 2014 and to draw up plans for 2015.


Everybody has been talking about the difficult economic situation in this country of late. Russian road construction specialists also discussed points for future optimization.
They were lavish with words…
— In the 2015 budget, expenditure will be optimized with respect to priorities in the construction and maintenance of roads and to mastering the practice of government procurement, the Head of “Rosavtodor”, Roman Starovoit, remarked.
Maxim Sokolov, the RF Minister of Transport, also spoke about the optimization of expenditure.
— The public road system today is a big industry in this country, and it faces the same problems as the economy on the whole, he stressed. — We are seeing a serious reduction in the amount of budget investments and the problems connected with the national currency weakening, such as inflation and an increase in the cost of construction materials. But this is not the time to lose heart, the Minister stressed. 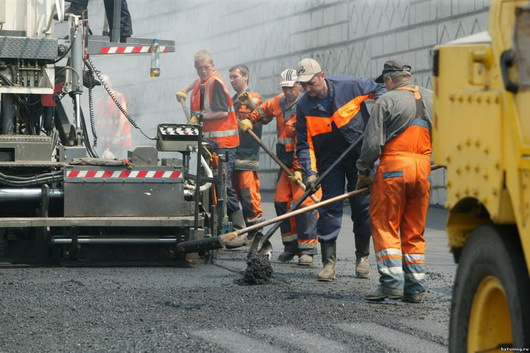 — We’ll have to restructure some institutions and reconsider priorities in the industry. But I want all the heads of the road construction companies to survive and keep their businesses in these hard times, said the Minister.
— A lot of contractors’ representatives are present here and all of them know about the complicated process of cooperating with commercial banks, Sergei Ten, the Deputy Chairman of State Duma Committee on Transport, told the audience, and he promised road constructors: we won’t stand aside but will insist on amending the acting Federal Law ?44 effectively. Of course, both contractors and customers are aware of the situation. We came across similar situations in 2008 and 2009, and I am sure that we shall overcome the difficulties of the present one.
…and with money as well
Despite the forthcoming difficulties, as mentioned by the speakers, the road construction industry’s financial indices look more than impressive when compared with other spheres of economics. Maxim Sokolov quoted the figure of 430 bln rubles – the previous year’s budget for FRA ‘Rosavtodor’. Approximately the same figure constitutes the budget for the city of St. Petersburg. And despite the crisis, financial backing of the road construction industry will be increased by 20% as compared with last year. This year the budget for the main road construction institution will exceed the astronomical figure of 500 bln rubles. 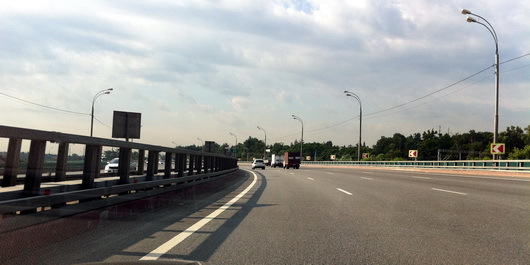 Within the framework of this impressive budget, 219 bln rubles are planned to be spent on federal road works and maintenance. 9,400 km of federal roads are earmarked for repairs with this money. In the instance of successful implementation of this plan, the total length of federal roads of normative state quality will increase to 62% (31,000km). To compare: in March 2015 this figure was 52.8%. By 2017, 80% of Russia’s federal roads will have been brought up to this norm (40,000 km).
92 bln rubles are to be set aside for building new roads in 2015 and for putting into operation 324 km of new federal roads by the end of the season. In 2016, road constructors plan to put into operation 360 km, and, in 2017, 384 km of new roads. In the next few years these figures will increase to 750-1000 km per season. Such large-scale plans show the emphasis that the authorities are placing on road construction, which is considered to be one of the drivers of the Russian economy as a whole.
What’s the priority?
The priority objects for road constructors in the coming years are the design and construction of the traffic passageway across the Strait of Kerch and the investment project of Novorossyisk: the Strait of Kerch automobile road section reconstruction. Besides this, large-scale construction and repair works are planned for the roads of the North Caucasus, Siberia and the Far East: on federal highways M-29 “The Caucasus”, ?-51, 53, 55 “Baikal”, ?-56 “Lena” and ?-60 “Ussury”.
In the central part of the country, plans have been made to develop federal highways connecting the capital with the regions and the neighboring countries. Work is planned on the automobile roads ?-5 “The Ural” (Moscow-Chelyabinsk), ?-9 “Baltiya” (Moscow-towards Riga), ?-8 “Kholmogory” (Moscow-Arkhangelsk) and ?-7 “The Volga” (Moscow-Kazan).
In the North-Western region, the principal work will be done on the federal roads ?-181 “Scandinaviya” (Saint-Petersburg-Helsinki), R-21 “Kola” (Saint-Petersburg-Murmansk), ?-180 “Narva” (Saint-Petersburg-Tallinn) and ?-121 “Sortavala” (Saint-Petersburg-Petrozavodsk). 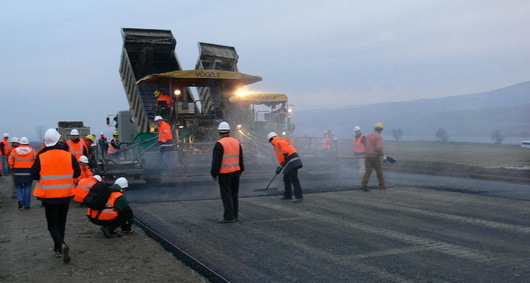 The crisis passed them by
These are the main plans of the road constructors for this year and the coming years. Last year, automobile road sections totaling 581.7 km, as well as 25.7 thousand meters of engineering structures, were built and reconstructed. The key objects of 2015 are the construction of the Rocksky tunnel connecting North and South Ossetia, the putting into operation of the world’s largest cable-stayed arch bridge in Novosibirsk and a number of Olympic objects in Sochi. 9,529.2 km of roads were repaired and put into operation last year and 484 engineering structures with a total length of 32,585 meters.
Specialists describe the transition to 100% major road repair financing and maintenance concluded on the basis of the Government’s approved basic standard costs as of one of the key achievements of the previous year.
These are the main results and future plans for the Russian public road system. And what about the crisis? Russian road constructors don’t seem to have noticed it.