The Minister of Construction, Housing and Utilities got acquainted with unique construction technology at the “Saint-Gobain Academy” scientific center.


As our special correspondent Elena Kudryashova reports, on the eve of the solemn celebration of the Saint-Gobain company's 350th anniversary, Mikhail Menn met with top executives of the company in the unique building of the training center in east Moscow. Director General of Saint-Gobain CIS Gonzague de Pirey, Senior Vice-Presidentand Head of Global Sector “Construction production” of Saint-Gobain Group Claude Imauven, and Scientific Research and Innovations Director Didier Roux took part in the meeting.

Minister Menn was shown around the most energy efficient building in the capital, which interested him very much. He highly appreciated the educational tasks being solved in Saint-Gobain Academy and recommended the leaders of Russian large construction companies to study there.
“We are ready to invite you to the creation of a scientific-technological platform based on MSCU. And we are expecting your specialists to take part in the working group,” he said.
Senior Vice-President and Head of Global Sector “Construction production” of Saint-Gobain Group Claude Imauven reminded that this year the company is celebrating the 350th anniversary. “We are very pleased to see the support in Russia at the state level”, he said and asked about Mikhail Menn’s personal assessment of the construction materials market. 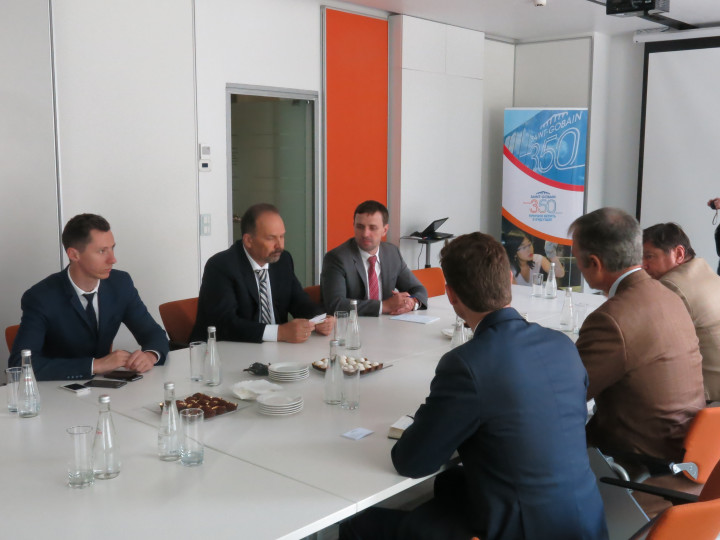 “Despite some negative forecasts at the beginning of the year,” Mikhail Menn said, “housing construction in Russia is going on. Besides, the Russians are now interested not so much in the quantity but in the quality of the houses constructed”.
In this connection there is a growing demand for the most advanced technologies in environmental friendliness and energy efficiency, which Saint-Gobain possesses. The first-in- Russia innovation training center “Saint-Gobain” was erected in an old building in Moscow using the most advanced technology of a “comfort house”. Not only is the consumption of resources is decreased significantly, but the most comfortable atmosphere in acoustics, air quality etc is created.
Different training sessions and discussions take place at Saint-Gobain Academy. The company also has 9 plants in Russia for construction materials production, and the company is developing its capacities according to the demand on the market.
Answering journalists’ questions, Mikhail Menn assured them that Russian housing policy will focus on quality. People want to have high quality and hi-tech housing, and so we need to implement innovative technology. 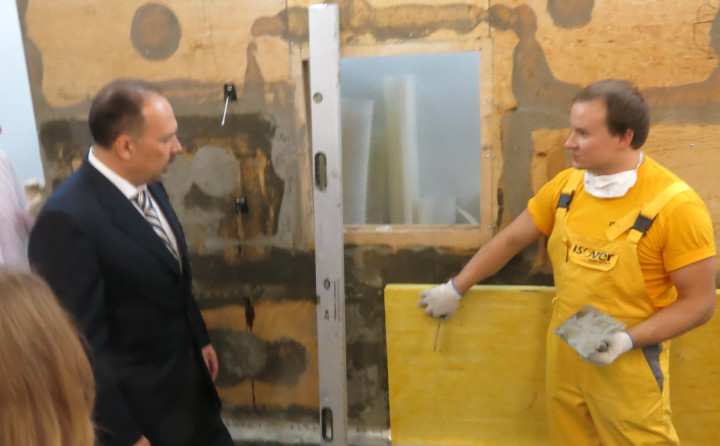 The minister also remarked that the concept of the innovation center development will be ready by the end of the year, and the French company Saint-Gobain will take part in the center's creation.
To remind you, Saint-Gobain is an international industrial group of companies with its HQ in Paris. It includes 1,500 companies in 64 countries. Its staff is 190,000 employees. Saint-Gobain's volume for business in 2013 was over 42 million euro. In Russia at Saint-Gobain plants heat insulation is produced in Egorievsk and Chelyabinsk, dry construction mixtures are produced in Arzamas and Polevskoy (Sverdlovsk region), and container glassware is produced in Kamyshin and Mineralniye Vody.

Russia has a national association of manufacturers of building materials

A Pricing Research and Development Board willbecreatedat the Ministry of Construction, Housing and Utilities

The new National Association of manufacturers of building materials