The Russian market for electric power tools is balanced. But our producers are trying to expand their positions. And they have managed to do so.

Who and what are present in the market
The demand for electric power tools is not seasonal. They are bought both in summer and in winter not only by construction companies, furniture-makers and windows installers. They are in demand with common consumers.
Russian producers are conquering the market, and expensive foreign tools add to it.
Executive director of Trade companies and electric power tools producers Association Alexander Dolgorukov characterizes the situation in the market. — There are both brand and “no name” products in the Russian market. “No name” – I mean cheap types of products of unknown producers that appear in the market suddenly and disappear abruptly. Mainly all the products of this type are “made in China”. According to Alexander Dolgorukov, the segment of common medium price electric tools is in demand now. It includes Russian tools and reasonably priced imports.
— The original domestic products have become competitive in this market, remarks the expert. — And the localization of famous brand production in Russia is rather high. Nevertheless, the first in sales volumes is one of the domestic producers. 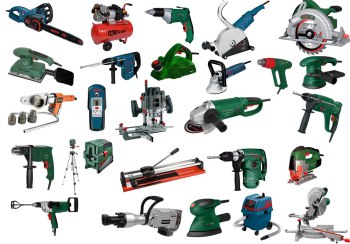 A very different China
Currently the Russian electric power tools are represented by three large enterprises making 25% in the total volume of the market. They are: “Interskol,” a company which has its plants both in Russia and other countries, the “Fiolent” company in Crimea and the electric machine plant “Lepse” in Kirov, producing hand operated polishing tools. But none of our production can do without some components produced abroad (Spain, Bulgaria and China).
— Electric power tools may be divided into main-operated and battery-operated. Both types are in professional and in common use, - says Igor Musykantov, an internet-shop salesman. — Many customers do not want to buy Chinese tools and look for famous brands — Bosch, Makita, Hitachi, AEG, DeWalt, but they do not know that many of them have moved their plants to China.
It is in China that the most advanced plants producing electric power tools were built, assures the salesman.

Beware of imitations!
Of course, there are plants producing these tools in Europe: in the Czech Republic, Germany, Austria, Hungary, and Bulgaria. But they cannot compare with China in volume of production. And still, all of the microelectronics in their products are made in China.
Currently, in spite of price increases, about 30—40% of the market belongs to famous brands: Bosch, Makita, DeWalt, Hitachi, Sparky, AEG, Metabo, Kress and others. About 25%, as we have already mentioned, is the share of three large Russian producers. 10% of the market is made up of imitations of famous brands.
The rest – are the products of unknown origin, of low price and quality, which don’t correspond with either Russian or international standards or the simplest safety requirements. And such electric power tools, if they may be called so, occupy about a quarter of the market. 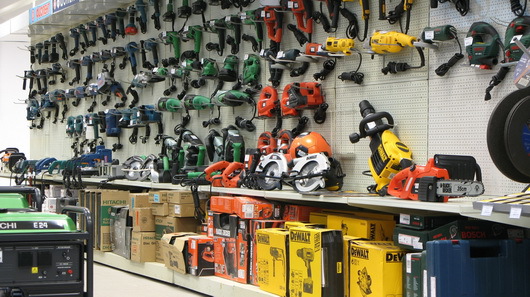 A good thing
The main difference between professional and common tools is their operational lifetime. Professional tools work twice as long, and other performances are higher. For example, a domestic circular saw weighs 4.3 kg and costs 4,000 rubles. A brand name one with similar performances weighs 2.7 kg but costs 7,400 rubles. The Bos?h Company produces electric power tools in two colors: blue for professional use, and green for common use. The experts of the market are unanimous about the growing quality of hand-held electric power tools, independent of the country of production.

What’s in a name?
But according to Vitaly Zhirnov, Head of Department in one of the producing companies, it is sometimes the case that buying cheap products in the market the purchaser takes risks of buying a one-use tool.
— The same you may find in many chain super-markets, he adds, — there are cheap electric power tools from unknown firms though they are sold with a warrantee.
But having bought such tool in say Vladimir, if it breaks you’ll be able to repair it only in Moscow. So you should think before you buy. 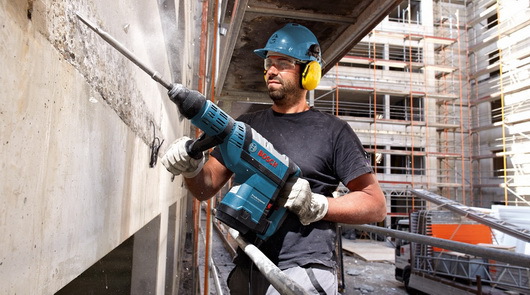 Do not waste money
An experienced customer chooses the tools according to his tasks. If he needs it for everyday use – making capital repairs or building a cottage – of course, it’s better to choose a good brand professional tool. But if your task is to hang a picture on the wall and next time you will use the tool in a couple of years, your purchase may be more modest.

Useful advice
— Choosing a tool you should take into account the materials you will work with, stresses Igor Muzykantov.
For example, a percussion-lock drill is used for making holes in brick and concrete. Buzz saws are used for cutting wood, and may be used for plastics, gas concrete, or gypsum plasterboard. An electric screwdriver is used for screwing tap screws and gimlet points, though sometimes they are used for making holes, even in ice, by fishing fans. 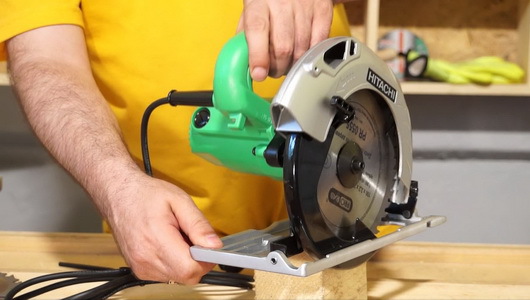 How much?
— The market of hand-held electric power tools is abundant now, thinks Alexander Yakubov, a consulting salesman. — After the 50% price rise in February the demand decreased. Then prices went 20% back, and demand began to grow a little. Home-produced tools also became a bit more expensive because of imported components the Russian tools went up 15-20% in price.
— People mainly buy drills and screwdrivers, Alexander says. — Pneumatic hammers, circular saws, disc grinders are bought more rarely. Both professional and common tools are in demand – 50/50.

To rent a hammer
The demand for main-powered electric tools have prevailed that of battery-powered. The price also depends on quality, functional performances, warranty service. But if you do not need an instrument for constant work, you may rent it.
Such service is very popular now during the crisis.