This article analyses the current situation in the electric cables market and the problems with which electric cable producers have to contend.


Hitting the mother lode
There are four sectors of all of the various kinds of cables application (about 40 large groups). The first group includes cables for energy application – the majority of overall production volume. The second is cable-utilities for machines, equipment and devices. The third group is composed of cables for transport – sea, air and rail. And the fourth group comprises communications cables – optic and copper. For more detailed information and full cable classification, refer to ISO 11801 2002, in which all are described.
Let’s consider the main parameter of electric wires and electric cables, the core cross-section measured in square millimeters. Cores are usually made of copper or aluminium. The copper core is a better conductor because it can carry a larger current with a smaller cross-section than can aluminium. The core is made of both an integral piece of metal and of thin, spun wires – this makes wires and cables more flexible.
Optic cable production is growing, while other output is decreasing
Following moves by experts from the international association, “Electric Cable”, a union of cable producers, 75% of all cables go to the energy sector and are used for producing other goods or in other industries’ product completion.
— Public housing in Russia has decreased 5% now, and it generally uses low-voltage cables (up to 1 Kv), the usage of which, in its turn, decreased 7-8 %, said one of the specialists from the “Electric Cables” Association. And the main thing is that now there is almost no large-scale industrial construction in which average high-voltage cables are used. The market has been dampened by a difficult situation in the machine-building sector for electrical appliance production, 17% of overall output. We have to follow decreasing construction and machine-building trends.
Russian cable producers are suffering under capital stock investment reduction in industrial construction and public housing and in network (distribution) companies. The only sector with significant growth of production is the optic cable segment. The indices of this area have grown 22-23% a year. 6 mln km of optic fiber is produced in Russia (cf. China, which produces 8 times as much).
Most optic fiber in Russia is imported from Japan, France and the USA. Considering probable sanctions, this sector is much too vulnerable. And the quality of the Chinese product, which will probably have to stand in for Japanese, French and American product, leaves much to be desired.
Who will sell us marine cable?
— Since 2008, there have been more cable production plants in Russia than necessary to satisfy market requirements, said Dmitry Ptashinsky, the director of one of the cable production plants in the Moscow region. So, overproduction is taking place. And due to the current economic crisis, the market has shrunk even more.
Practically all types of electric cables are produced in Russia, excluding only a few. 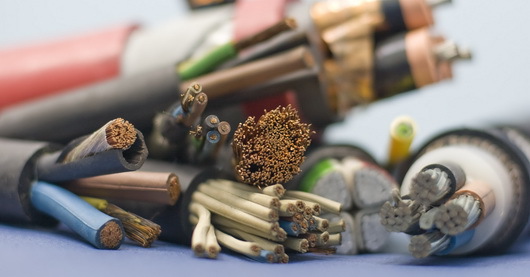 First of all, these are 400-500kV high voltage cables, but the demand for them is no more than some hundred meters a year. So, Russian production is irrelevant.
The second is large-sized submarine lines. To develop this important segment, significant investment is badly needed, and it is now a very tricky area. For example, the problem of laying electric cable on the seabed to Crimea is now very acute – it will have to be bought abroad, not in Europe or the USA but in some other country.
But the Russian military-industrial complex, as experts say, is getting all it needs only from Russian production, which is quite easily explained.
According to the “Electric Cable” association of experts, import share in the Russian market ranges from 18 to 20%. Cable production is generally delivered from China, Turkey, Finland, France, Belarus, Taiwan and Hong Kong.
How much copper is lacking and what might come of it
Besides the two types mentioned above, low-voltage cables is also commonly imported. It is mainly Lan-cable, which is used for modern computer networks. However, official imported quantities, especially from Asian countries, which are rather attractive for their price, do not correspond to their real values.

Experts in fire safety know better than anybody what can come of this.
The thing is, not only is the copper content lower but the isolation layer is also thinner in such wires and cables. And that means the cables become hot. It often results in fires, deaths and property destruction, especially in the low-voltage power-plant group.
In the experts’ opinion, the absence of state controls for such product is a very serious problem, for the state and independent establishments but not affiliated companies.
80-90% of the cable’s price is down to materials. Cable production cost-effectiveness is not high. So some producers save on materials, copper first of all. Sometimes its content in the core is as little as 25% and so the core is much thinner. Correspondingly, fewer other materials are used. Such is business…
Exporting exists, but we are not allowed into Europe 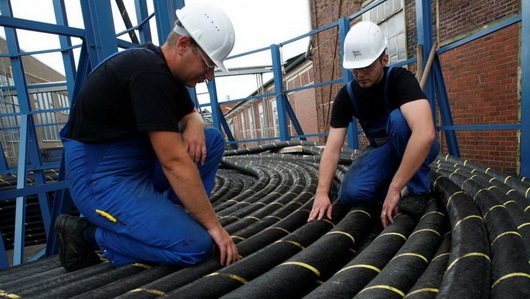 By the way, all cables carry the mark of the producer, ie. a differentiating line under the covering. Taking this into account, we find 170 plants producing cables in Russia. But there are only about 60 ‘real’ ones, endorsed by the experts from the “Electric Cables” association – they produce 82-85% of all cables made in Russia.
The main sales market for Russian cable production includes, naturally, CIS countries. Besides these countries, Russian cables are delivered to India, Bulgaria, Iran, Iraq, China, and Turkey when energy objects are constructed there. The countries of the Middle East and Central Africa also buy Russian cable but in small volumes. The situation with Europe is very sad.
— The European market is practically closed to Russian electric cable production, says the Director of one of the home plants/producers. There is no interest in us there, while our main advantage is the price of production: we engage in predatory pricing. Even in the inner market, we sell cables almost at cost price.
However, before our production reaches the customer, it passes though the chain of dealers, each of them adding his own percentage.
But our standards are tougher than anybody else’s

What we can really be proud of are rules and regulations in the cable production industry. Modern standards for electric cable production and application are equal to the most advanced foreign reference points, and in some cases are better – in the area of power lines production, first of all. These modern norms were introduced in Russia in 2010 and later they obtained international status, in the framework of the Customs Union.
Some foreign companies work in our country according to these standards: the French one in Uglich, the Finnish one in St.Petersburg, and the Italian one in Rybinsk.

Air conditioner market review: a sales slowdown and a change of leaders