According to the President of the Electric Power Tools Producers and Trading Companies Association, economic crises barely influence the market for handheld power tools: these instruments are always in demand.

— Mr. Goldstein, your Association unites both producers of electric power tools and also trading companies, so that’s why it’s you that we are asking about the current condition of the domestic market for handheld electric power tools. What is its volume? What changes have taken place lately, and what tendencies are being observed?
— When creating our Association we united 19 companies - well-known producers and traders. Our task is to make the market more civilized and to restore the industry, which was destroyed following the USSR’s disintegration.
Now, the electric power tools market is one of the largest in the world, and one of the fastest-growing. That’s why all of the world producers are interested in it.

Our association was founded in 2008 and unites the majority of the world’s leading producers, such as Bosch, Black and Decker, Hitachi, Makita, Hilti, AEG and, of course, domestic companies: Interscol, Fiolenti and others.
Russian producers occupy approximately one fifth of the domestic market. And they are successfully competing with world famous companies, both on the Russian market and in delivering their products to France, Italy, Germany, Canada, the USA, the Middle East and the CIS countries. Our electric power tools market shows an annual increase of, on average, 15%.
Of course, economic crises do not provide for smooth development. For example, the crisis of 2008—2009 resulted in a market fall. It decreased by 36% then, but recovered very quickly and from 2010 to 2013 it was developing steadily.
The current crisis, having started in 2014, resulted in a market volumes decrease of 16% as compared with the previous year. The decrease continued at the beginning of this year. But conditions became better in the second quarter and in June retail sales volumes almost achieved last year’s levels.
Of course, development and growth will go on. And in spite of the crisis, electric power tools are always in demand.

— What is the share of battery and mains-operated equipment, professional and domestic, on the market? What is in greater demand?
— In the whole world, including Russia, battery tools are in greater demand. This is connected with the increased quality and capacity of batteries. They work longer once they have been charged and you can use more powerful tools. There are also new battery-based instruments: rotary saws, grinders, punchers, etc.
If, in 2005, battery tool consumption was 10%, in 2008 it was twice as much (20%), in 2011 it was 21%, and in 2012 it was 23%. However in 2014 it decreased slightly, to 20%. Battery tools are more expensive than mains-operated ones and now the demand has moved towards a cheaper segment, i.e. mains-operated. But it is temporary; there is no doubt that battery tools will win.
Just for reference: on the European market, the share for battery tools is about 50%. These types of instruments have more prospects for updating and development: the battery capacity increases and the tools become more powerful. Lithium-ion batteries have replaced nickel-cadmium ones, and they do not self-discharge.
Electric power tools are of two types: professional and domestic-grade. The latter is made from cheaper materials with a simplified design. As compared with a professional item it is not so heavily used, so the requirements are lower.

— What, in your opinion, is the place for domestic production on the Russian market? How do you assess its quality and competitiveness? How are sales indices changing? Are imported components used in domestic tools?
— Currently, domestic products occupy 25% of the market. In 2012, 21m tools were sold, in 2013 it was 23m tools, and in 2014 it decreased to 19.4m. So about 20m different electric power tools are sold annually — about 60 bln rubles, in terms of money.
As far as the competitiveness of our tools is concerned, it is very easy to evaluate it. Does a consumer buy Russian tools? Yes, he does. He votes for them with his rubles. 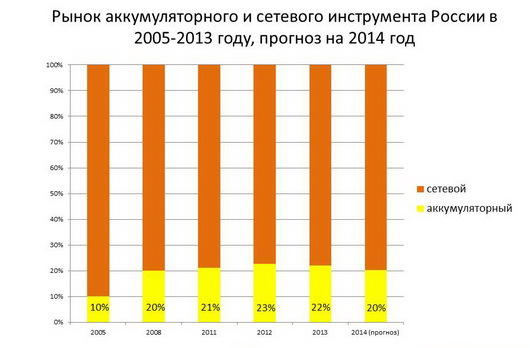 The service network is very important. Only one Russian company has 250 service centers all over the country. And we may be sure of the high quality of Russian products. Domestic producers have put forward the task of making Russian production as good as that of famous brands. As for the use of foreign components in producing Russian tools, Russian producers mainly buy electronics and batteries abroad. It is a different picture with consumable materials – they are mostly imported - abrasive discs and corkscrews for drills excluded, as 50% of them are produced in Russia.

— How is this product regulated and standardized? Does it help to protect consumers from counterfeit production?
— Electric power tools are produced under three technical regulations of the Customs Union, based on standards. All the products are developed and their certification is carried out on the basis of these standards. It is an important means of struggling against low-quality products and counterfeit. By the way, 55% of the market is occupied by companies who are members of the Association - their products correlate with all of the requirements.
To seal the Russian market against non-certified and dangerous products, the Association has prepared the Charter of Electric Power Tools Producers and Retailers. We shall send it to all market participants. The companies that sign the document will guarantee that they compete honestly and won’t use “grey import” schemes.
The signed charter will be sent to the Federal Agency on Technical Regulating and Metrology and the Federal Customs Service. And this will give them a helping hand in identifying low quality products.
“No name” products are often low-quality counterfeit products: they are cheaper and not taxed and this is a basis for unfair competition. Besides, such instruments may be dangerous to users.

— Mr. Goldstein, what measures does the Association take for training new engineering staff?
— We are constantly concerned about the development of the industry, and of course young new engineers and technicians are needed. The Association, together with the Interscol company, has created a corporate chair at the Moscow State University of Civil Engineering, where students study tools and how to work with them, both theoretically and practically. Thus, we are growing the staff.

— What are the prospects for the domestic industry for handheld electric power tools production?
— Talking about the prospects: the crisis, having influenced the industry, has brought positive results. We started to replace imports earlier than others. We are now creating our own intellectual center, a concepts generator. New, modern, equipped plants are being opened – for example, a plant in the special economic area of Alabuga (Tatarstan).
Thus, the industry has real potential and prospects.