Domestic elevators from domestic components in Russia within three years


— Mr. Tishin, what is the condition of elevator mechanisms in Russia presently?— Currently almost 490,000 elevators are in used in Russia, and 90% of them are man lifts.  That is about 430,000 elevators being exploited in buildings. About 130-140,000 of them need to be replaced. The main points of attention are where to get the money for that and on what terms to fulfil the work.  For example, Moscow is a rich city. Here a program was adopted, and next year the replacement of all out-of-date elevators will be completed. A lot of money has been allotted for this - six billion rubles, which is why the process in the capital is very active. If we consider the regions, however, the situation is quite the opposite. The process of replacement is very slow, or there is nothing at all. So we have to use the procedure of service life extension for the elevators.  — And how are elevators, which we lack so much, produced?— If we speak about the producers, the situation is quite good. The capacity of the available plants is able to satisfy all needs. But again there’s the problem of money. The plants work only according to orders made in advance.  140,000 elevators are to be replaced, and our plants can produce 170,000. In order to fully replace all out-of-date elevators, we should multiply this 140,000 by 1.6 million rubles (the average cost of one elevator replacement). In that case we get a gigantic sum of money. If we’d had that, we could have replaced all the old elevators with the help of our producers in a number of years.   But what is going on? The state has been gradually passing the expenses for elevator replacement on to the people.  Starting from this year, residents are to pay for the capital repair of the building, and a part of this money is allocated for elevator replacement. A special program of replacement for about 3,000 elevators over two years has been launched in the Moscow region. It requires that a third of all financing must come from the residents’ money. This money source has just appeared; it was not used earlier.

— What is the ratio of domestically and foreign-produced elevators in Russian lifting mechanisms?

It is about 65% domestically-produced elevators, and 35% imported models. I should mention that half of imported mechanisms are produced in Belarus, in Mogilev.  Before the crisis and sanctions there was a tendency of buying imported equipment. However, according to the program of import replacement, we have undertaken obligations to switch over to domestically-produced components before 2018. We’ll see how it works, but for now one third of our elevators are imported.  And both components and service have become more expensive, which creates additional difficulties.

— How is the verification of elevators’ technical conditions carried out?

— Once a year a technical check of every elevator must be carried out, and a conclusion on its further operation must be issued.  But sometimes, managing companies delegate both work on elevator servicing and finance for inspections to the servicing organization. And then servicing organizations hire whomever they want to fulfil the work. Thus they break the principle of independent verification. It’s one of the drawbacks in our system.

Since 2010 a new technical regulation of the Customs Union has been put into practice. It has generated a lot of questions for our branch. The thing is that every country in the Customs Union used to have its own legislation system for the safe operation of elevators. We had almost solved the problem. 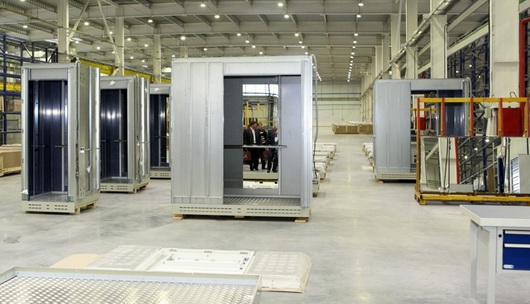 — Let’s have a talk about elevator production and the plants producing such equipment.

— Before the new technical regulation was adopted, there had been about 30 enterprises in Russia producing elevators and all the necessary equipment. Today, all elevator mechanisms must be certified in the framework of the aforementioned document’s requirements. And during these five years the number of plants producing elevators and their components has grown 6 times, up to 171.

Every region wants to have an elevator-producing plant on its territory. The competition is very positive. But there have been some cases when a new plant in a region was opened, started to produce and deliver elevators, and then went bankrupt and closed. This is when the elevators they produced are already in operation! Who will provide service for these elevators? There is a definite difference in equipment. We do not have an integral strategy on this kind of subject as of yet.  An elevator delivery must be calculated, including assembly, mounting and operation.  And there are only three principal producers of elevators: the Karacharovo, Shcherbinka, and Serpukhov elevator-producing plants, all of which are in the Moscow region.

— Does the domestically-produced equipment correspond to modern requirements, including in quality and safety?

— Our plants may not be producing very competitive elevators, but they correspond to all the requirements for safety, environmental friendliness, etc.  The plants’ standardized production is used in 90% of large-scale dwelling construction. The quality for this is quite sufficient.

Our plants can produce more comfortable and expensive elevators. But problems arising in the process of operation (vandalism, service non-payment, etc.) render the production of more expensive equipment moot. Service and repair are well-adjusted. Components and joints may be ordered 5-10 years after putting the elevator in operation. We have them and we will still have them in the future. 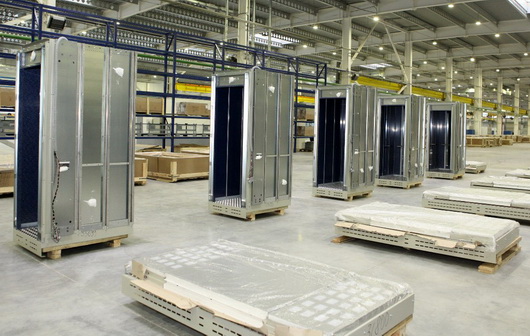 — How do you assess Chinese equipment?

— Chinese equipment, as well as other imported equipment, has become much more expensive. It is calculated in dollars, not in rubles. Of course, there are relatively cheap models, but before the crisis Chinese production was delivered to Russia more cheaply than from Europe, and it was advantageous. For example, we could bring components from China and assemble them in Russia.

Thus, our elevator producers can be divided into those who produce their own equipment and those who assemble imported components. Last year we managed to implement state monitoring for the elevator production industry. It is carried out by the Federal Agency on Technical Regulating and Metrology. At the beginning of this year the Agency started to inspect the plants. Gradually we are putting the methodological base in order. And, believe me - there will be order.

— How does the state support domestic producers?

— I have already mentioned the program of import replacement. Besides, a protective duty for imported elevators has been established in Russia. Assuming there are no sharp changes in the economic situation in the country, the tendency will be quite positive.

Russian affiliates of western companies; how they work under the conditions of import replacement

How Moscow authorities are solving the problem of parking and garages