How Moscow authorities are solving the problem of parking and garages

The annual growth of automobile numbers in Moscow is 200,000. Can the capital’s parking lots deal with it?


The struggle with irregular parking has lasted for decades. Roads and yards filled with automobiles are the capital characteristic feature.
In Seoul there are 5.2 million parking spaces for 3 million autos. For about the same number of cars we have a bit more than 1 million parking places. So, every third car has no place. We decided to clear up how it goes with the construction of garages and parking lots in Moscow and what the Moscow government is doing to solve the problem. 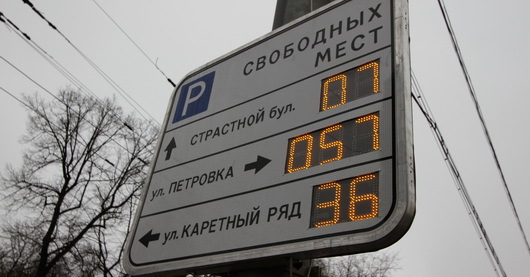 The most worrying situation is in Central Administrative district
— The general situation is as follows, said Damir Talipov, acting Director General of the Garages construction and exploitation department of Moscow. —There are districts where the demand for parking places is fully satisfied, and there are the ones with a severe shortage. According to Talipov, in Kurkino district there are enough places for parking. The reason is very simple: the construction was carried out taking into account the residents’ interests. The lack of parking places is evident in CAD: construction there is expensive and the land allocated for development is limited. The city solved the problem by constructing multilevel parking lots. They are erected according to the special Program of garages-parking lot construction. The Program has been implemented since 2010, when Moscow first started to build multilevel car lots. Now 143 garage complexes have been put in operation, providing 48,330 parking places.
22 garage complexes with 7,466 parking places are planned for the coming two years. 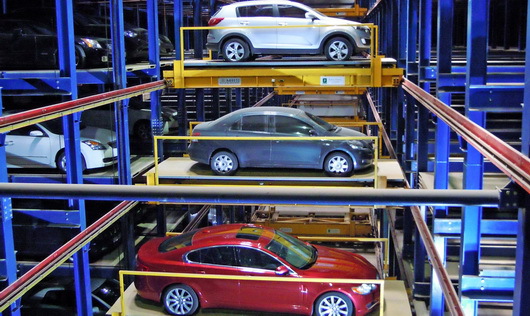 Automated parking is not a heal-all
It is really difficult to find some dozens square meters for parking in some districts (e.g.in CAD). And the way out seems to have been found: mechanized and automated parking. A multilevel automated parking garage works as follows: a special elevator with a palette lifts a car to a necessary floor. The car is installed into a cell and the free elevator goes down.
The first such automated parking was constructed in the Ostankino district in 2013. It occupied little land. 121 square meters, and housed 34 cars! While in Moscow yards such space is occupied by 8-10 cars. It is the main advantage of such parking lots in large cities. There was another “parking tower” with an elevator in Ostankino, but the process didn’t go further..
Such parking garages are built in Moscow, but they are very few. Experts think, these parking garages are not popular because they are expensive.
The Moscow garage construction department has its own point of view. The evident advantage of such parking garages is the minimal land occupied for a large number of cars.
— It is important, Damir Talipov explains, — that the management system is fully automated, and only one operator manages it. But there are drawbacks, and one of them is the necessity to have specially trained personnel. Besides, it is impossible to buy or sell a parking place; they are all rented as such buildings are not the objects of capital construction they may be removed to other district. And another drawback is their long-term pay-back.
That’s why MAPs, alas, are not a panacea. 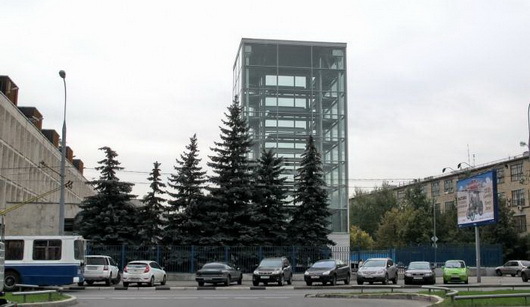 Why the idea of “people’s garages” failed
Moscow mayor Yury Luzhkov once suggested a seemingly sustainable idea of “people’s garages”, that were supposed to be sold by quite democratic prices. And what’s the result? Garages were built but the demand was more than experts said, and the very important factor of accessibility was not taken into consideration.
— There were serious mistakes in the realization of the program,
Marat Khusnullin, Moscow Deputy Mayor, admits. — Garages were built in places where there was unoccupied territory, but no people to use them. Big money was invested but the garages are without demand.
— There is a complex of such “people’s garages” in our district, but it is very inconvenient to reach it, says Zinoviy Malevanny, a driver from Brateevo.
And in the center of the city the situation is quite the opposite. There parking places were bought in no time, but the city turned out to be at a loss: the land is expensive, and the prime cost appeared to be very high – 500,000-600,000 rubles.
— The primary cost of garage objects turned out to be much higher than claimed in 2009, i.e. 350,000 rubles, Damir Talipov confirms. — So, the difference in the preplanned sum for the garages construction and their real cost became a burden for the city budget. Nevertheless, due to the program about 49,000 additional parking places appeared in Moscow.
Some of them were bought at the null cycle, others were bought at auctions, and some are rented. Electronic trading has been organized. Recently the Moscow Government took a decision to allot 3 billion rubles to finish the construction of those “people’s garages” that were unfinished for the lack of money. But they will be sold for their real cost. 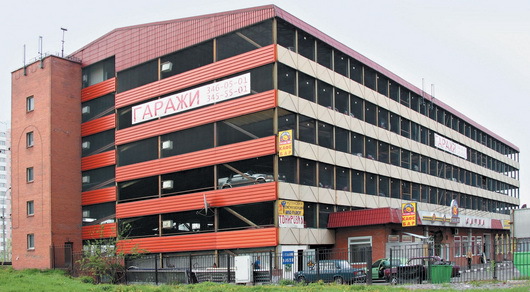 How to make “wild” parking garages civilized
To solve the transport problem Moscow authorities are working in several directions. They are developing the territories of the yards. Not less than 30 parking places are planned in the yards. It will help to get cars away from sidewalks and grass-plots. In the nearest future the city will obtain more than 400,000 parking places.
At the same time, parking spaces are organized near border crossings of the road network – there appeared a reserve of about 60,000 parking places.
— The reason for Moscow traffic jams is that the road network is many times smaller than in other mega-metropolises of the world, Marat Khusnullin explains. — It is impossible to build the roads we lack quickly. So, we must use the existing road network. If we take away the cars parked on the street, the traffic capacity will grow by 25%.
At a recent business-forum Khusnullin suggested a cardinal solution of toughening the parking system in the center of Moscow. He explained it simply: the land is very expensive in the center and none of the mega-metropolises can afford allocating 18 square meters for one parking place (according to the standard). And in Moscow cars are parked almost in two rows in some streets. To get rid of this situation, following Deputy Mayor, it will be forbidden to park inside Boulevard Ring.
Many were taken aback by Marat Khusnullin’s suggestion, but everybody understands that parking problem must be solved to overcome the traffic collapse.

It is expensive to park cars at the side of the road in Berlin
Unloading of the city center is one of the most acute problems in the capital. This was the aim of the authorities when some years ago introduced paid parking places inside Boulevard Ring.
— Paid parking is quite a serious regulating factor for traffic in the center of the city, sociologist Egor Muleev says. — It can alter the traffic balance in favor of city public transport. By increasing the expenses for private transport usage we decrease its attractiveness as compared to other types of transportation. So, the number of private vehicles in the center of the city will decrease. In Berlin and other European capitals cars are not often seen at the side of the road. There is a great number of underground parking garages, which are not very popular with our car-drivers.
Also there are other regulating factors in big European cities.
— In Europe parking near the pavement is much more expensive than underground parking, says Ekaterina Reshetnikova, an expert from the Higher School of economics. — In Berlin, to park a car on the sidewalk costs from 1 to 5 euros an hour, in Barcelona – 2.5 euros. And the underground parking costs 1 euro an hour. (That is in Europe it is cheaper to park underground, and vice versa with us.— ?.?.). Besides, in many big cities parking time is limited – usually it is 2 hours, then you will be fined. Thus the driver is made to understand that the time of being in the center is limited, and in many cities — London, New York, Paris, Prague – the closer to the center the more expensive parking is.
In San Francisco, for example, the parking tariff is regulated by the current demand. The price for a parking place grows if it is greatly required.
— We cannot yet use such complex calculations, complains Reshetnikova, — but some attempts to implement economic methods for traffic regulation are taken.

A parking alternative to outbound routes
To be objective, Moscow differs from other European cities — traffic collapse is more felt on outbound routes than in the center. And solving the problem of traffic jams here is a vast work. The problem is partially alleviated by building parking garages. But they are of help if they are situated at the final metro stations. If it is closer, a car driver won’t abandon his car for public transport. According to Ekaterina Reshetnikova, the authorities will have to think over some additional attractive measures. For example, a cheap transportation ticket and free intercepting parking. Thus, they must do their best to make a car driver change to the overcrowded stuffy metro.
— The traffic problem of Moscow cannot be solved only by paid parking or its absence, expert Reshetnikova resumes. — It is necessary to develop the market of cheap taxis and to enhance the comfort of city on-ground transport, to widen traffic-free zones.