The situation with cultural and historical heritage objects is worsening year by year. It is necessary to solve systematic problems.


Russia is the country of really great historical and cultural heritage. It is our pride and our sorrow, because the situation with monuments preservation is very sad. Many of them have disappeared, others are on the way. And it is not because of remorseless time but indifference and, of course, corruption…

The country of impudent fire bugs
One of the decorations of Moscow-area town of Klyazma was the so called Alexandrenko’s cottage. Till recent times it had been part of an architecture ensemble of four buildings. It was erected in 1908 and was considered to be a significant federal monument of urban development and architecture. The author was painter and architect Sergei Vashkov. The cottage was a replica of the early Russian art of building (“terem” - palace). According to Klyazma resident architect Ekaterina Notkina, the object is of great cultural value, but the situation around it is unhealthy. 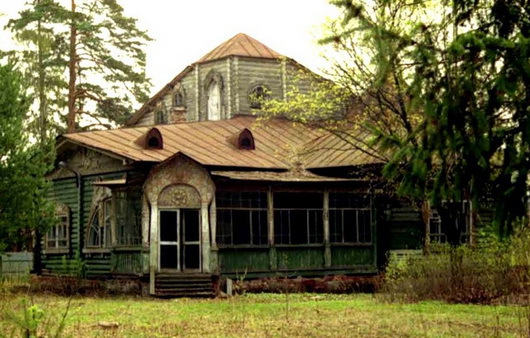 It was under management of the state unitary enterprise “Sigma”, which removed everything valuable: they took down parquet work, and dismounted the fire place to take away valuable Dutchware. Local residents organized volunteer clean-ups with up to 150 people taking part. Everything was ready to start restoration work. Dozens of letters were sent to different departments with claims to save the situation. No reaction. In the end the cottage was burnt to the ground – it was purposefully set on fire, and there is evidence. But a criminal case was not opened.
From head of the All-Russia anti-corruption counseling office “Clean hands” Maria Bast’s point of view, corrupt collaoration is evident. Then again local people came out with the initiative to restore the historic building at their expense and leave it in the state’s ownership. Such an idea seems to be most welcome. But functionaries have their own opinion on the situation: they suggest selling the lot. A reasonable question arises about the character of authorities' and law-enforcement agencies' interaction. 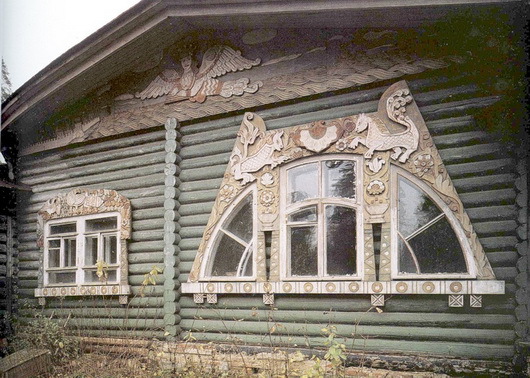 Of course, the small cottage's disappearance is not a cause célèbre. Quite the other thing is the Bolshoi theater. During the reconstruction plundering reached astronomic figures: the cost account increased 16-fold as compared with the primary one. It turned out that one and the same work in designing and detailed documentation were paid several times.

«Who will rent it – it’s a monument!»
According to the data of the RF Ministry of Culture, there are 140,000 cultural heritage objects, 20,000 having federal status, 115,000 being monuments of regional and local significance. 13,000 objects are included in the UNESCO World Heritage list.
According to Maria Bast, the number of claims in defense of cultural values from initiative groups and proponents has sharply increased lately. There are many complaints about cases of corruption. The detailed study of the information showed that the situation is very worrying. The problem may be divided into several aspects. 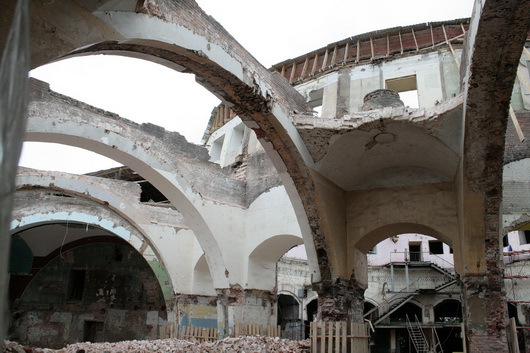 The demolition of Round train shed of Nickolaevsky (Leningrad) railway station in Moscow, built by architect Konstantin Ton in 1846-1851

The first one is objects non-purpose use. Most often they are rented out for commercial activity. Sometimes it is done legally, sometimes in the shadows. In Moscow it is possible to rent a historic mansion. Authorities care about timely rent payment, not safekeeping. Moreover, historic buildings are not included in special registries, and it is believed to be done quite consciously to simplify renting such monuments. Some real-estate agencies make a good profit on it.
A calculation of budget losses from the existence of such market a was made. If the local administration rented out the buildings directly minimal additional income would have brought 250 m rubles to the budget. The same situation is in the regions. Sometimes part of such agencies are closely connected with local authorities. And it is easy to imagine where the financial flow is moving. This business is very profitable, especially when there are monopolists renting out historic heritage sites, as they dictate high rent rates and cash in.
One of the most widely spread corruption schemes is the conclusion of rent contracts with one of the affiliates for further under-lease of rented objects at a commercial price. Money is paid in cash. An official’s charge is from 30% to 50% of income. It’s clear that cultural heritage objects leasing is one of the most profitable businesses. A third of offices to let are actually objects of cultural and historic value.

Lenin marching… to a cottage settlement
Another scheme is connected with direct sale of historic objects. If one could sell a monument it must be in the condition when restoration is impossible. One of the favorite methods here is fire setting, as in the case with Alexandrenko cottage. It often happens when officials and businessmen are both interested in such a result.
From the RF State Duma Deputy assistant Victor Rybnikov’s point of view, the Federal law on the cultural heritage object's security is organized in such a way that corrupted structures may use its mechanisms to feed off of. All deputy claims are answered in the same way: a famous building turns out not to be included in the registry of historic heritage sites.
According to law requirements, physical and conventional persons must bring to light such objects. But the final decision is taken after carrying out expert examination. And here’s the corruption loophole. An expert’s conclusion may be far from objective, but serve somebody’s requirement (not for free, of course). 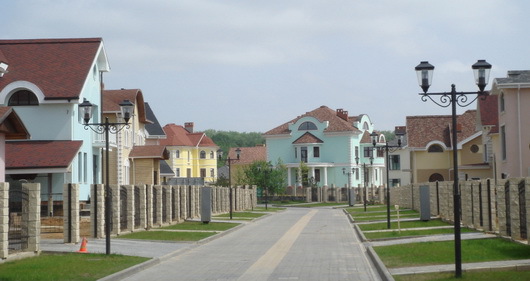 Still another problem is memorial estates. Unlike towns they are not inhabited. And thus they become of great interest for developers who want to build cottage settlements. Such a situation arose with memorial estates “Borodino” and “Lenin Gorky”.
The guarded territory of the memorial estate “Lenin Gorki” was massively developed with cottages and stores, for which the category of lands had been altered. Businessmen’s impudence and functionaries’ non-feasance had hardly resulted in the demolition of the monument on Kashirskoye highway and the occupation of the roads towards the museum of Lenin, making it the road to a cottage settlement. Thanks to the museum officials, who addressed the public, the situation was taken under control, and they managed to stop the illegal takeover of the territory. Further construction in the area is forbidden.
Every time when a historic object is leased a document defining its usage is signed for the sake of its safekeeping. But as Vladimir Tsvetnov, Director of the Department of cultural heritage state security of the RF Ministry of culture admits, it is always possible to find loopholes in law.

Till when?!
As the state lacks financing for federal ownership objects maintenance, it has to auction them. And the result is vividly demonstrated by the following example. 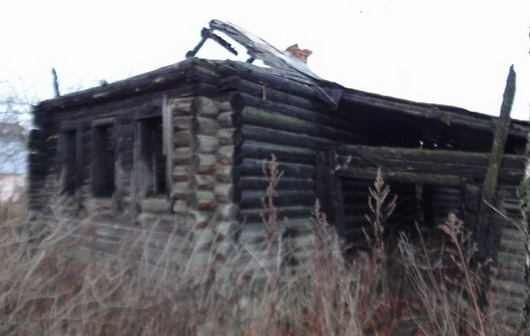 There is, in fact there was, Brikoshin’s house known as the house “Lenin and a stove-setter”. It was leased for 99 years to private hands on condition that a tenant would restore it. After the tenant got the building, it burned down (regards to Alexandrenko cottage!), the land was alienated, and now the place is abandoned. And nobody is responsible for that! As Maria Bast remarks, when it comes to the historic and cultural heritage it is a great risk to lease such monument, even on condition of restoration.
In the center of Moscow, in Sadovnicheskaya street, a building known as the house of merchant Privalov was demolished. Historic preservation activists insisted that the complex built under the design of architect Earnest-Richard Nirnzee is of historic and cultural value. But it didn’t help. There is no house any more. 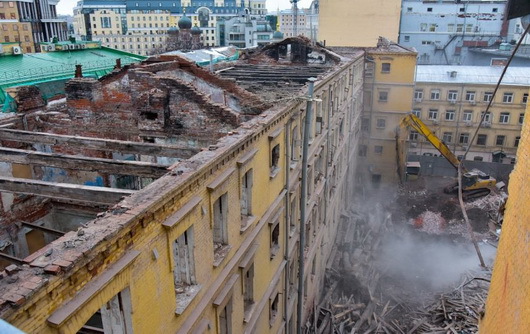 “The cases when houses, cottages, estates and other historic objects are burnt or demolished, are not rare, — complains Gennady Fedotov, member of The Public Chamber. And it’s our common sorrow. Such barbaric attitude has developed since the 90's of the last century.
For the latest 20 years the country has lost a great number of cultural and historical objects. And there is a need for public discussion of an All-Russia Program on restoration of cultural heritage.
There are a lot of dramatic cases in the capital and regions when communities are in opposition to local authorities and defending different monuments. And we cannot do so without solutions for systemic problems leading to the loss of the historic and cultural heritage of our country.